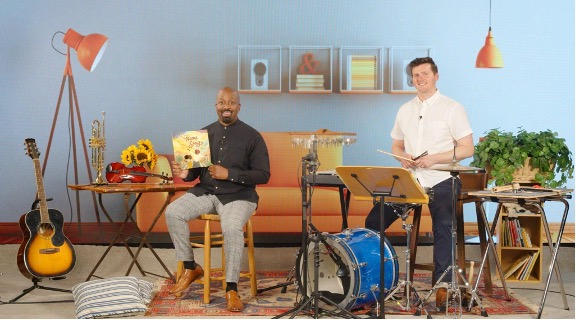 The new season of Symphony Storytime will launch with six English language children’s books representing diverse stories and a variety of musical instruments. Later in the year additional English language and Spanish language episodes will premiere. The series will feature fun and educational children’s stories such as “Llama Llama Red Pajama,” “Grumpy Monkey,” and “Change Sings” by National Youth Poet Laureate Amanda Gorman, best known for delivering her poem “The Hill We Climb” at President Biden’s inauguration. All episodes will be free and available online to the public and educators at Studio 125, Oregon Symphony’s new digital destination for music.

“Our previous two seasons of Symphony Storytime have garnered worldwide viewership and acclaim, underscoring the continued demand for engaging, entertaining and educational musical content for young children,” said Scott Showalter, President and CEO of Oregon Symphony. “With fans spanning across several continents, this innovative digital series has helped expand Oregon Symphony’s mission to bring the joy and power of music to families and classrooms in our own community and throughout the world.”

Symphony Storytime was originally inspired by parents’ and educators’ desire for meaningful digital content for their young children as families were encouraged to stay home during the COVID-19 pandemic. Created for educators and families with young children and pre-k to early elementary school students, the highly repeatable series of 10-15 minute episodes has since become a valued resource for at-home and classroom learning. Each episode includes a narrator-read book on-screen accompanied by an Oregon Symphony musician performing a “soundtrack” inspired by the story, and is followed by an educational segment that features fun facts about the highlighted instrument and a specially prepared solo.

“In addition to performing with a world-class orchestra, my role as a musician with the Oregon Symphony includes engaging with our wonderful community and supporting our music education efforts,” says Stephen Kehner assistant principal percussion for Oregon Symphony. “We know that children around the world have loved watching these series over and over again and I’m thrilled to participate in this project, sharing incredible stories and instruments with kids of all different backgrounds and cultures.”

Among the narrators for this season is flutist and Oregon BRAVO Youth Orchestras’ Adam Eccleston, and Director of Arts and Education at PHAME - Portland (school of the arts and performance) Matthew Gailey. The series launches with Adam Eccleston reading "Your Name is a Song” alongside Oregon Symphony’s Assistant Principal Percussion Stephen Kehner; and Matthew Gailey joining Symphony cellist Trevor Fitzpatrick for “Wonder Walkers.”

New episodes will be released every two weeks beginning August 9, 2022 and made available on Oregon Symphony’s website and YouTube channel.

A partial list of Oregon Symphony’s 2022 Symphony Storytime episodes is included below.

“Your Name is a Song” featuring percussion
Written by Jamilah Thompkins-Bigelow and illustrated by Luisa Uribe
Hosted by Adam Eccleston and featuring Stephen Kehner, percussion

The multi-Grammy Award-nominated Oregon Symphony ranks as one of America’s major orchestras. Led by Music Director David Danzmayr, it serves more than 250,000 people annually through live concerts and award-winning education and community engagement programs. The Oregon Symphony has broken attendance and fundraising records in recent years, while innovating on stage through new series such as SoundSights, Sounds of Home, and SoundStories. Additionally, online programming and syndicated broadcasts reach tens of millions more people throughout the world. The 2021-2022 season marked the 125th anniversary for the Oregon Symphony, the oldest orchestra in the Western United States. For more information, visit www.orsymphony.org.