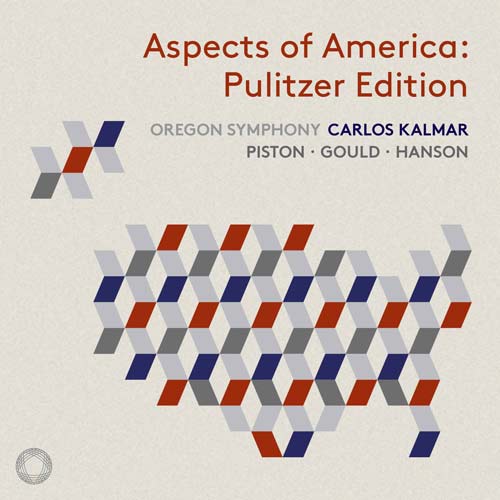 Oregon Symphony is thrilled to announce its recording of Aspects of America: Pulitzer Edition, conducted by Music Director Carlos Kalmar, has been nominated for a 2021 Grammy® Award in the Best Orchestral Performance category. Released in February 2020 as the second installment of the acclaimed Aspects of America series, the recording features three Pulitzer Prize-awarded symphonic works, including Walter Piston’s Symphony No. 7, Morton Gould’s Stringmusic and Howard Hanson’s Symphony No. 4 “Requiem.” This is Oregon Symphony’s third Grammy nomination in the category under Kalmar.

“I am very proud that the Oregon Symphony and I are being recognized in such a great way by the Recording Academy,“ says Kalmar. “With this recording we are contributing to the great legacy of amazing American music.”

Kalmar and Oregon Symphony’s previous Grammy Award nominations in the category of Best Orchestral Performance include Spirit of the American Range in 2015, as well as the recording of Music for a Time of War in 2011, which featured performances hailed by critics in The New York Times, The New Yorker and Musical America for its imaginative and relevant program. Oregon Symphony is excited to add this 2021 nomination to its library of Grammy-nominated works.

Aspects of America: Pulitzer Edition was released by the PENTATONE label, and is available on PENTATONE, Amazon, Spotify, and iTunes. Under Kalmar’s guidance, Oregon Symphony has recorded subsequent albums on the PENTATONE label, such as Music for a Time of War (2011); This England (2012), featuring works by Britten, Vaughan Williams and Elgar; The Spirit of the American Range (2015); Haydn Symphonies 53, 64 & 96 (2017); Aspects of America (2018); and Gospel Christmas (2018), with conductor Charles Floyd.

The multi-Grammy Award-nominated Oregon Symphony ranks as one of America’s major orchestras. Led by Music Director Carlos Kalmar, it serves more than 235,000 people annually through concerts and award-winning education and community engagement programs. The Oregon Symphony has broken attendance and fundraising records in recent years, while innovating on stage through new series such as SoundSights, Sounds of Home and SoundStories. As 2019/20 marks its 123rd season, the Oregon Symphony is the oldest orchestra in the western United States. For more information, visit www.orsymphony.org.