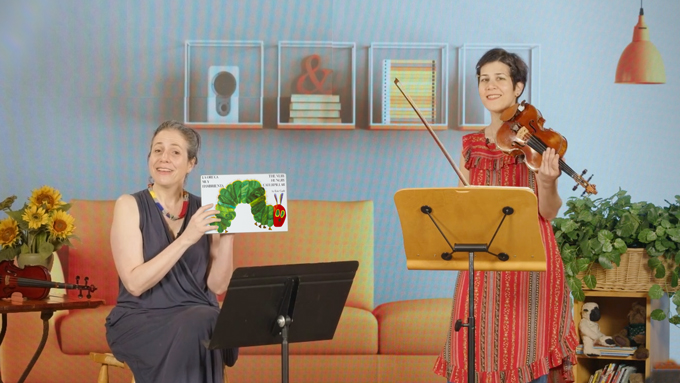 The series will feature fun and educational Spanish-language children’s stories such as “The Very Hungry Caterpillar (La Oruga Muy Hambrienta)” that features Oregon Symphony Assistant Principal Second Violin, Inés Voglar Belgique and showcases how a violin can make a sound like a caterpillar munching. The bi-lingual episode “Abuelo,” which is a moving story about a young boy’s fond memories with his abuelo, and “Pete el Gato and His Four Groovy Buttons” are both narrated by Marilyn de Oliveira, Assistant Principal Cello, Oregon Symphony and accompanied by Oregon Symphony’s Principal Clarinet, James Shields.

According to the 2020 Census, Oregon's Latinx population grew by more than 30% in the last ten years. Latinx are now the largest minority group in the state and their numbers have grown faster than the national rate in each of the last three decades. “This season’s four Spanish-language episodes reflect our ongoing commitment to reach Oregon’s Latinx audiences, and diverse populations around the world from across the U.S. and Mexico to the U.K., India and Ukraine,” said Scott Showalter, President and CEO of Oregon Symphony. “Having musicians play music alongside narrated storybooks provides a unique and fun way to introduce classical music and instruments to young children at home and in the classroom.”

There are also several English language episodes remaining in this season, including: “Grumpy Monkey,” and “Change Sings” by National Youth Poet Laureate Amanda Gorman, best known for delivering her poem “The Hill We Climb” at President Biden’s inauguration. All episodes will be free and available online to the public and educators at Studio 125, Oregon Symphony’s new digital destination for music.

Symphony Storytime was originally inspired by parents’ and educators’ desire for meaningful digital content for their young children as families were encouraged to stay home during the COVID-19 pandemic. Created for educators and families with young children and pre-K to early elementary school students, the highly repeatable series of 10-15 minute episodes have since become a valued resource for at-home and classroom learning. Each episode includes a narrator-read book on-screen accompanied by an Oregon Symphony musician performing a “soundtrack” inspired by the story, and is followed by an educational segment that features fun facts about the highlighted instrument and a specially prepared solo.

A partial list of Oregon Symphony’s 2022 Symphony Storytime episodes is included below. The one remaining Spanish-language episode will be announced in the coming weeks.

The multi-Grammy Award-nominated Oregon Symphony ranks as one of America’s major orchestras. Led by Music Director David Danzmayr, it serves more than 250,000 people annually through live concerts and award-winning education and community engagement programs. The Oregon Symphony has broken attendance and fundraising records in recent years, while innovating on stage through new series such as SoundSights, Sounds of Home, and SoundStories. Additionally, online programming and syndicated broadcasts reach tens of millions more people throughout the world. The 2021-2022 season marked the 125th anniversary for the Oregon Symphony, the oldest orchestra in the Western United States. For more information, visit www.orsymphony.org.