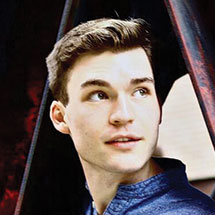 With this concert, Alexi Kenney makes his debut with the Oregon Symphony.

The recipient of a 2016 Avery Fisher Career Grant, violinist Alexi Kenney has been named “a talent to watch” by the New York Times, which also noted his “architect’s eye for structure and space and a tone that ranges from the achingly fragile to full-bodied robustness.” His win at the 2013 Concert Artists Guild Competition at the age of 19 led to a critically acclaimed Carnegie Hall debut recital at Weill Hall.

Recent highlights include debuts with the Omaha Symphony, Sinfonia Gulf Coast, Asheville Symphony, and Wheeling Symphony, and his return to the Indianapolis Symphony. Alexi has appeared as soloist with the Detroit, Columbus, California, Amarillo, Jacksonville, Portland, Riverside, Santa Fe, and Tulare County symphonies. He has appeared in recital on Carnegie Hall’s Distinctive Debuts series and at Caramoor, the Isabella Stewart Gardner Museum and Jordan Hall in Boston, the Phillips Collection in Washington D.C., the Green Music Center at Sonoma State University (CA), and Lincoln Center’s Mostly Mozart Festival. He has been profiled by Strings magazine and the New York Times, has written for The Strad, and has been featured on Performance Today, WQXR-NY’s Young Artists Showcase, WFMT-Chicago, and NPR’s From the Top.

Chamber music continues to be a main focus of Alexi’s life – he is a member of the Chamber Music Society of Lincoln Center’s The Bowers Program (formerly CMS Two). He tours with Musicians from Marlboro and musicians from Ravinia’s Steans Institute and regularly performs at festivals including the Marlboro Music Festival, Music@Menlo, Ravinia, and Yellow Barn. He has collaborated with artists including Pamela Frank, Miriam Fried, Steven Isserlis, Kim Kashkashian, Gidon Kremer, and Christian Tetzlaff.

Born in Palo Alto, California in 1994, Alexi holds a Bachelor of Music and Artist Diploma from the New England Conservatory in Boston, where he studied with Donald Weilerstein and Miriam Fried. Previous teachers include Wei He, Jenny Rudin, and Natasha Fong.