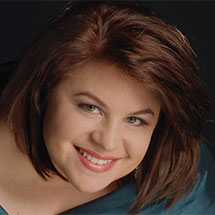 Amber Wagner last appeared with the Oregon Symphony on December 31, 2016, when she performed Beethoven’s Symphony No. 9 with conductor Carlos Kalmar.

American soprano Amber Wagner was recently featured in Opera News as one of 25 artists poised to break out and become a major force in classical music in the coming decade. Last season, she made her Australian debut with Opera Australia in Melbourne as Sieglinde in Wagner’s Die Walküre and returned to the Metropolitan Opera as Senta in Wagner’s Der fliegende Holländer; in Europe, she reprised the title role in Strauss’ Ariadne auf Naxos for her debut with Opéra national de Lorraine à Nancy; and made her New York recital debut with the George London Foundation at the Morgan Library.

Ms. Wagner’s recent operatic engagements include her debuts at the Bayerische Staatsoper in the title role of Ariadne auf Naxos (a role she later reprised for her company debuts with Minnesota Opera and Palm Beach Opera) and Prague State Opera as Brangäne in Wagner’s Tristan und Isolde; appearances as Leonora in Verdi’s Il trovatore, Elsa in Wagner’s Lohengrin, and Elisabeth in Wagner’s Tannhäuser with Lyric Opera of Chicago; Elsa in Wagner’s Lohengrin and Senta in Wagner’s Der fliegende Holländer with the Savonlinna Opera Festival; Leonora in Verdi’s La forza del destino at Washington National Opera in a new production directed by Francesca Zambello; her Metropolitan Opera debut as Anna in Verdi’s Nabucco; and her return as Amelia in Verdi’s Un ballo in maschera.