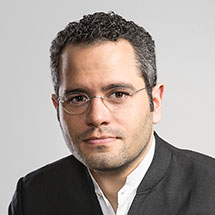 Appears on: James Ehnes Plays Mozart with the Oregon Symphony

With a unique combination of intensity, enthusiasm and technical clarity, American conductor Andrew Grams has steadily built a reputation for his dynamic concerts, ability to connect with audiences, and long-term orchestra building.

The youngest of a large mixed-race family from Severn, Maryland, Andrew began studying the violin when he was eight years old in the public school system. In 1999 he received a Bachelor of Music in Violin Performance from The Juilliard School, and in 2003 he received a conducting degree from the Curtis Institute of Music where he studied with Otto-Werner Mueller. He was selected to spend the summer of 2003 studying with David Zinman, Murry Sidlin and Michael Stern at the American Academy of Conducting at Aspen and returned to that program again in 2004.  Mr. Grams served as Assistant Conductor of The Cleveland Orchestra from 2004-2007 where he worked under the guidance of Franz Welser-Möst, and has since returned for several engagements.

Now in his 7th ESO season, Andrew Grams became music director of the Elgin Symphony Orchestra after an international search. His charismatic conducting and easy accessibility have made him a favorite of Elgin Symphony audiences.  He’s the winner of 2015 Conductor of the Year from the Illinois Council of Orchestras and has led orchestras throughout the United States including the Chicago Symphony, Detroit Symphony, National Symphony Orchestra, St. Louis Symphony, Cincinnati Symphony, Baltimore Symphony, Philadelphia Orchestra, Dallas Symphony, and the Houston Symphony.

A frequent traveler, Mr. Grams has worked extensively with orchestras abroad, including the symphony orchestras of Toronto, Montreal, and Vancouver, the Orchestre National de France, Hong Kong Philharmonic, the BBC Orchestras of London, Wales and Scotland, the symphony orchestras of Sydney, Melbourne, Adelaide and Western Australia, the New Zealand Symphony Orchestra, the Barcelona Symphony Orchestra, Het Residentie Orchestra in The Hague, Netherlands.  He has led multiple performances of New York City Ballet’s George Balanchine’s The Nutcracker® and the first performances of the new production of The Nutcracker for the Norwegian National Ballet in Olso. Last season, Mr. Grams led the Sacramento Philharmonic, Dallas Symphony, Zagreb Philharmonic, Fort Worth Symphony, Detroit Symphony, and the Minnesota Orchestra.

Also an accomplished violinist, Mr. Grams was a member of the New York City Ballet Orchestra from 1998-2004, serving as acting associate principal second violin in 2002 and 2004.  Additionally, he has performed with ensembles including the Orpheus Chamber Orchestra, Orchestra of St. Luke’s, Brooklyn Philharmonic, and the New Jersey Symphony as well as performing with chamber music ensembles around the country.