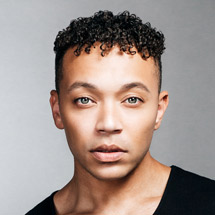 Appears on: Disney in Concert: A Magical Celebration

Andrew Johnson is a Disney kid at heart and is humbled to share the music and magic from the stage! He has toured all over the United States, Europe, and Asia, as a lead vocalist and dancer, and his performances have been broadcast on national and international television. Andrew has performed on FOX’s The X-Factor, The Conan O’Brien Show, and the MTV Video Music Awards. He has sung background for artists such as Demi Lovato, Fifth Harmony, LeAnn Rimes, and Florence and the Machine. His theatrical credits include Frozen-Live at the Hyperion (Prince Hans). Rent (Benny), Five Guys Named Moe (Four-Eyed Moe), and Joseph and the Amazing Technicolor Dreamcoat (Joseph). Andrew has shared the stage with singers/actresses Shirley Jones and Bernadette Peters and has performed live duets with recording artists Patti LaBelle, Erykah Badu, and singer/actress Jodi Benson (the original voice of Ariel in The Little Mermaid). He is a singer/songwriter and recording artist and his music is available worldwide on iTunes, under his artist name DRWMCHL. He would like to thank his family for their love and support and Ted Ricketts for the opportunity of being part of this show.