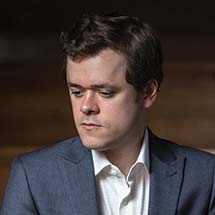 Appears on: Chopin’s Piano Concerto No. 2

Benjamin Grosvenor last appeared with the Oregon Symphony on January 25, 2016, when he performed Chopin’s Piano Concerto No. 1 with conductor Tomáš Netopil.

British pianist Benjamin Grosvenor is internationally recognized for his electrifying performances, distinctive sound and insightful interpretations. His virtuosic command over the most arduous technical complexities underpins the remarkable depth and understanding of his music making. Described as “one in a million...several million” by The Independent, his “astounding technical gifts, the freshness of his imagination, his intense concentration, the absence of any kind of show, and the unmistakable sense of poetic immersion directed solely at the realization of music” have been lauded by Süddeutsche Zeitung.

Benjamin first came to prominence as the outstanding winner of the Keyboard Final of the 2004 BBC Young Musician Competition at the age of eleven, and he was invited to perform with the BBC Symphony Orchestra at the First Night of the 2011 BBC Proms aged just 19. A pianist of widespread international acclaim, he was announced as the inaugural recipient of The Ronnie and Lawrence Ackman Classical Piano Prize with the New York Philharmonic in 2016. Recent and forthcoming concerto highlights include engagements with the Boston and Chicago symphony orchestras, the Philadelphia Orchestra, Hallé Orchestra, and the London, City of Birmingham, San Francisco, and Washington National symphony orchestras, as well as a tour of China with Britten Sinfonia. Benjamin works with such esteemed conductors as Riccardo Chailly, Alan Gilbert, Ludovic Morlot, Kent Nagano, Esa-Pekka Salonen, Leonard Slatkin, Nathalie Stutzmann, Michael Tilson Thomas, and Kazuki Yamada.

In 2011 Benjamin signed to Decca Classics, becoming the youngest British musician ever, and the first British pianist in almost 60 years, to sign to the label. Benjamin’s most recent CD on the label, Homages, was named Instrumental Recording of the Month in BBC Music Magazine and awarded a Diapason d'Or, with Diapason's critic declaring that “his pianistic ingenuity, his lyrical voice and aristocratic distinction remind one of the young Josef Hofmann or Ignaz Friedman. The whole recital is charged with Romantic élan.”