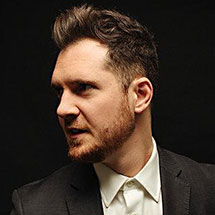 Bill Prokopow is many things: a composer, pianist, vocalist, producer, mixing engineer, and visual artist. Since writing his first song when he was four years old, he has spent much of his life crossing genres, from composing, conducting, and singing with orchestras across the country (including the Pittsburgh Symphony) to touring the nation playing midi-hacked Nintendo controllers in the chiptune-rock band “I Fight Dragons,” to creating dazzling projection mapped visuals reminiscent of Fantasia for his award winning orchestral-electronic solo project “Panthenon.” Bill feels most at home when combining his classical sensibilities with the ethos of the current moment, creating work that serves the now and launches itself into the future, toward eternity.