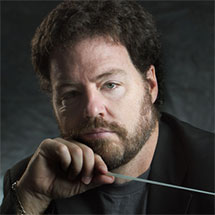 Appears on: The Music of The Rolling Stones

Berklee-trained arranger/conductor Brent Havens has written music for orchestras, feature films and virtually every kind of television. His TV work includes movies for networks such as ABC, CBS, and ABC Family; commercials; sports music for networks such as ESPN; and even cartoons. Havens has also worked with the Doobie Brothers and the Milwaukee Symphony, arranging and conducting the combined group for Harley Davidson’s 100th Anniversary Birthday Party Finale. He has worked with some of the world's greatest orchestras including the Royal Philharmonic, the Atlanta Symphony, the Baltimore Symphony, the Dallas Symphony, and countless others.

Havens recently completed the score for the film Quo Vadis, a Premier Pictures remake of the 1956 gladiator film. Havens is arranger/guest conductor for all of the symphonic rock programs including the Music of Led Zeppelin, the Music of Pink Floyd, the Music of Queen, and the Music of Michael Jackson. He also premiered a full orchestral show for Lou Gramm, The Voice of Foreigner, with Lou singing out front.