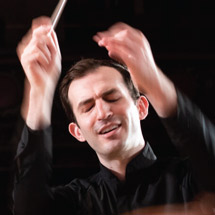 Appears on: Kishi Bashi with the Oregon Symphony and Disney and Pixar’s Coco

Known for his outstanding interpretations of American music, Berlin-based conductor Caleb Young has gained international renown as one of the most exciting emerging American artists of today.

Mentored by legendary Finnish conductor Jukka-Pekka Saraste, Young connects his rigorous training in the European classical tradition with a passion for the viscerality of American music, resulting in daring and fresh renditions of both. He commands a breadth of repertoire, able to tap into the full spectrum of American composers. Indeed, under Young’s baton, the works of Copland, Bernstein, Jennifer Higdon, and Jessie Montgomery receive artistic treatment equal to those of Mozart, Beethoven, Haydn, Mahler, Stravinsky, and Shostakovich.

Young debuted with the Van Cliburn Competition as its Cover Conductor in 2018, beginning a relationship that continues with a scheduled 2022 return to the storied piano competition in the same role. Other season highlights include a return to the Oregon Symphony and a debut with the Detroit Symphony. He has directed a number of the world’s premier orchestras, including the Oregon Symphony, Russian National Orchestra, Finnish Chamber Orchestra, Toledo Symphony, Columbus Symphony, and the Fort Worth Symphony Orchestra. As cover conductor, he recently served under John Williams at the Los Angeles Philharmonic and Berlin Philharmonic, and has worked with the Detroit Symphony, Cincinnati Symphony, St. Louis Symphony, Atlanta Opera, and the National Music Festival.