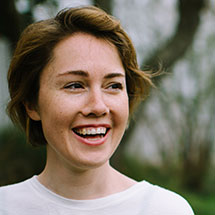 Caroline Shaw is a New York-based musician – vocalist, violinist, composer, and producer – who performs in solo and collaborative projects. She was the youngest recipient of the Pulitzer Prize for Music in 2013 for Partita for 8 Voices, written for the Grammy-winning Roomful of Teeth, of which she is a member. Recent commissions include new works for Renée Fleming with Inon Barnatan, Dawn Upshaw with Sō Percussion and Gil Kalish, Jonathan Biss with the Seattle Symphony, the LA Philharmonic at the Hollywood Bowl, the Orchestra of St. Luke’s with John Lithgow, Anne Sofie von Otter with Philharmonia Baroque, The Crossing, the Mendelssohn Club of Philadelphia, the Calidore Quartet, the Dover Quartet, Brooklyn Rider, Roomful of Teeth, and A Far Cry. Projects being introduced in the 2019/20 season include the premiere of The Listeners by Philharmonia Baroque Orchestra and Chorale, a textile+sound installation in Paris with artist Chloe Bensahel x Google Jacquard, a new carol for the Guggenheim Museum’s holiday show with Roomful of Teeth, a new string quartet to be premiered by Third Angle New Music, a new song for Davóne Tines in his Carnegie Hall recital, and a large-scale outdoor work for the Britt Festival in Oregon. She is currently developing an evening-length performance installation with choreographer Vanessa Goodman, through residenceis at Banff, Leña, and Montreal CCOV. Caroline’s film scores include Erica Fae’s To Keep the Light and Josephine Decker’s Madeline’s Madeline as well as the upcoming short 8th Year of the Emergency by Maureen Towey. She has produced for Kanye West (The Life of Pablo; Ye) and Nas (NASIR). Once she got to sing in three part harmony with Sara Bareilles and Ben Folds at the Kennedy Center, and that was pretty much the bees’ knees and elbows. Caroline has studied at Rice, Yale, and Princeton; currently teaches at NYU; and is a creative associate at The Juilliard School. She has held residencies at Dumbarton Oaks, the Banff Centre, Music on Main, and the Vail Dance Festival. Caroline loves the color yellow, otters, Beethoven’ Opus 74, Mozart opera, Kinhaven, the smell of rosemary, and the sound of a janky mandolin.