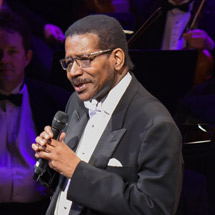 Appears on: Gospel Christmas with the Oregon Symphony

Conductor, pianist, and composer Charles Floyd has been heard in concert with more than 500 orchestras since 1991 in performances including classical music and pops. His eleven-year partnership with singer Natalie Cole included such projects as the multiple GRAMMY® Award- winning tribute to Nat King Cole entitled “Unforgettable, With Love,” the Emmy Award-winning pbs Great Performances concert video of the same title, and the GRAMMY®-winning releases Take a Look and Stardust.

Floyd now celebrates 22 years with the Oregon Symphony and Gospel Christmas. As an annual guest conductor of the Boston Pops Orchestra since 1994, his performances have included Gospel Night at Pops at Boston’s Symphony Hall, a program that features orchestral classics as well as a 120-voice gospel chorus. He has done similar concerts since 1995 with the Atlanta Symphony, the Akron Symphony, the Baltimore Symphony, the Cincinnati Symphony, the Houston Symphony, and the Saint Louis Symphony with such artists as Micah Stampley, Marvin Winans, CeCe Winans, Edwin Hawkins, Daryl Coley, Oleta Adams, Yolanda Adams, and Patti LaBelle.

His compositions range from chamber music to large orchestral and vocal works. A tribute to the Rev. Dr. Martin Luther King, One Man’s Dream for narrator and orchestra, was commissioned and premiered by the Charlotte Symphony Orchestra in 2001. His Four Spirituals for so-prano and orchestra was premiered at Boston’s Symphony Hall with the Boston Pops in 1995, and his oratorio Hosanna for gospel chorus and orchestra premiered there in 2000. Other compositions include a Cello Concerto (2014), a Piano Concerto (2014), a song cycle entitled Song of Solomon (2014), and numerous orchestral adaptations and arrangements.