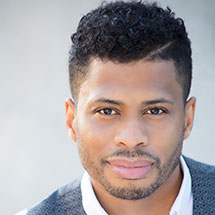 Appears on: Dancing in the Streets

Chester Gregory is an award-winning singer and actor. He was last seen starring in Motown: The Musical as Berry Gordy. Broadway credits include Tarzan, Cry-Baby, and Sister Act. Other credits include August Wilson's Fences and Two Trains Running. He has toured nationally with Dreamgirls, Sister Act, as well as his one-man show The Eve of Jackie Wilson. Chester has received many awards, including the Jeff Award and an NAACP Theatre Award, and has been presented the key to the city of his hometown of Gary, Indiana, and in East Chicago. He has also been chosen as an honorary state representative of Indiana and has received an honorary doctorate from his alma mater, Columbia College Chicago. He is currently producing several projects and recordings. Add him on social media @ChesterGregory.