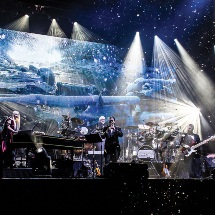 A visionary musician and businessman, Chip Davis is behind a remarkable body of work now spanning five decades. Since founding Mannheim Steamroller and American Gramaphone Records in 1974, Davis has written, arranged, and recorded over 35 albums, highlighted by the RIAA multi-platinum-certified Mannheim Steamroller catalog.

The best-selling Christmas music artist in history with 29 million albums sold, the group is celebrating the 35th anniversary of its annual holiday tour in 2019, making it the longest-running consecutive tour in the entertainment industry.

Davis has achieved worldwide sales of all album titles in excess of 40 million, with four multi-platinum, eight platinum, and 19 gold certifications in the US alone. Furthermore, Davis is the entrepreneur behind the hugely successful Mannheim Steamroller product line, author of nine children’s books, an amateur astronomer, and dedicated philanthropist.

The man behind Mannheim was born Louis F. Davis, Jr. in the archetypal small town of Hamler, Ohio (Pop. 500), the son of a family to whom music and “a sensitivity to nature” were integral. He graduated from the University of Michigan in 1969 with mastery in bassoon and percussion, before taking on a job at the Omaha, NE, ad agency Bozell & Jacobs. In 1974, Davis and fellow ad exec Bill Fries teamed up to create a fictional truck driver named C.W. McCall for a series of Clio Award-winning commercials. A string of hit albums and top 40 singles followed, including the gold-certified #1 classic, “Convoy.”

The success of C.W. McCall allowed Davis to focus on his own original music. He dubbed his new band Mannheim Steamroller – a play on the 18th-century musical technique known as the “Mannheim crescendo” – and in 1975 recorded FRESH AIRE, a landmark work melding elements of classical, rock, and pop into something altogether unique. Foiled by the industry’s inability to classify a genre for the album, Davis decided to distribute and sell FRESH AIRE on his own and American Gramaphone Records was born.

In 1984, Davis had the idea to reinvigorate traditional carols and Yuletide staples via Mannheim Steamroller’s always-eclectic sonic approach. MANNHEIM STEAMROLLER CHRISTMAS proved a phenomenon, the band’s first to reach the Billboard 200 album chart on its way to 6-times-platinum certification. A FRESH AIRE CHRISTMAS followed in 1988, ultimately surpassing its monumentally successful predecessor to be declared the sixth best-selling holiday album of the SoundScan era.

The indefatigable Davis still travels the country on behalf of American Gramophone, but prefers to spend his time on his 150-acre farm outside Omaha, joined by his children Kelly, Elyse, and Evan, as well as his “farm family” – a full menagerie of critters including four horses and two timber wolves.