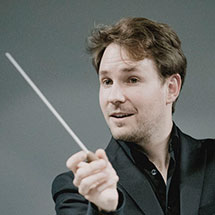 With this concert, Clemens Schuldt makes his debut with the Oregon Symphony.

Clemens Schuldt is one of the most exciting young conductors emerging from Germany today and is the principal conductor of the Munich Chamber Orchestra. Schuldt is widely praised for his innovative interpretations of Classical and Romantic Germanic repertoire, often using his creativity to include lesser known and contemporary repertoire in his programs.

Clemens Schuldt won the prestigious Donatella Flick Conducting Competition in London in 2010 and was the assistant conductor of the London Symphony Orchestra for one year. Born in Bremen, he studied the violin in the Gürzenich Orchestra Cologne and the German Chamber Philharmonic Bremen, before taking up his conducting studies in Dusseldorf, Vienna, and Weimar.