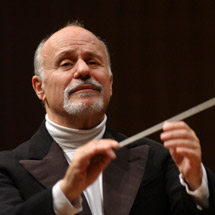 Appears on: Tchaikovsky’s Piano Concerto No. 1

David Zinman is one of the world’s most respected conductors. During his long career, he has worked with all of the leading orchestras throughout the world, including the Berlin Philharmonic, Royal Concertgebouw, New York Philharmonic, London Symphony Orchestra, Orchestre de Paris, and Royal Stockholm Philharmonic.

He is renowned for his enthusiasm for new music, new ways of performing, and making classical music more accessible to a younger audience. In Zürich, he founded the ‘Tonhalle Late’ concert series, in which a shorter-length symphonic concert is followed by a party.