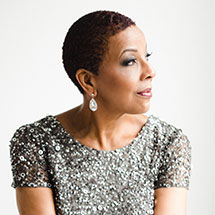 Appears on: Unforgettable: 100 Years of Nat and Natalie Cole

Whether accompanying herself at the piano or fronting a trio, big band, or symphony, Dee Daniels’ musical career is as varied as her four-octave vocal range is thrilling. She is a unique talent who transcends musical borders when she brings her jazz styling, infused with gospel and blues flavoring, to the stage. One critic says, “Daniels’ voice has a hypnotic quality, delivering an impressive range that gives the romantic songs and verse of 50 years ago new life and raw emotion.”

Though Dee has a bachelor’s degree in art education and taught high school art for a year in Seattle, she quickly realized that her true calling was music. Her vocal style was born in her stepfather’s church choir in Oakland, California, refined through the R&B era, polished during a five-year stay in the Netherlands and Belgium from 1982 to 1987, and brought to full fruition upon her return to North America. From those years to the present, she has performed and/or recorded with many legends of jazz including Benny Green, Houston Person, John Clayton, Russell Malone, Wycliffe Gordon, Cyrus Chestnut, Helen Sung, Christian McBride, and David Young – to mention a few.

Dee has cultivated a diverse career that has also seen her on theater stages, including the 2009 premiere of New York choreographer Twyla Tharp’s musical Come Fly Away, and as an inspirational speaker, with a keynote address being delivered at the 2009 Women’s CEO & Senior Management Summit in Toronto. Her international career includes performances in twelve African countries, Australia, South America, the United Kingdom, Hong Kong, Japan, throughout North America, and many countries within Europe. Dee has several CDs as a leader to her credit, in addition to being a guest artist on CDs of other artists.