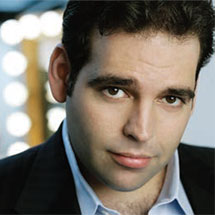 With this concert, Dimitri Pittas makes his debut with the Oregon Symphony.

Dimitri Pittas has performed on leading opera stages throughout North America and Europe, including debuts with the Bavarian State Opera, the Vienna State Opera, the Royal Opera at Covent Garden, and the Canadian Opera Company. For his debut with Canadian Opera Company as the Duke in Rigoletto, the Toronto Star said, “Dimitri Pittas comes off the best as the Duke of Mantua, with a flexible voice that can express real love and shallow desire with equal conviction.”

Mr. Pittas began the current season singing Verdi’s Requiem for the BBC Proms with the Orchestra of the Age of Enlightenment under Marin Alsop, Beethoven’s Symphony No. 9 with the Oslo Philharmonic, and Rachmaninoff’s The Bells with the Orchestre Metropolitain de Montreal under Yannick Nézet-Séguin. Operatic highlights include Nemorino in L’elisir d’amore with Houston Grand Opera and his role debut as Lt. Pinkerton in Madama Butterfly with Washington National Opera.

Additional highlights of recent seasons include two pivotal debuts in the 2013–14 season, the first of which was with the Bolshoi Opera of Moscow in the title role of Verdi’s Don Carlo, and with the Hamburg State Opera as Oronte in Verdi’s rarity I Lombardi. Roles include Cassio in Otello and Alfred in Die Fledermaus at the Metropolitan Opera; Rodolfo in La bohème with Oper Frankfurt, Houston Grand Opera, Lyric Opera of Chicago, Canadian Opera Company, Oper Leipzig, and Santa Fe Opera; the title role of Don Carlo at the Théâtre du Capitole in Toulouse; and the Duke of Mantua in Rigoletto at Opéra National de Bordeaux and Opéra de Lille.

Concert highlights comprise Beethoven’s Symphony No. 9 with the Cincinnati Symphony and the Cleveland Orchestra; Verdi’s Requiem with the Royal Concertgebouw Orchestra and the Baltimore and Colorado symphonies; Beethoven’s Symphony No. 9 with the Kansas City and Baltimore symphonies; and Mozart’s Requiem with the Lincoln Center Mostly Mozart Festival Orchestra; as well as in recital by the George London Foundation and at Carnegie Hall for the annual recital of the Marilyn Horne Foundation.