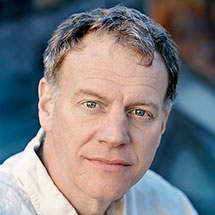 As co-founder of the company Giants Are Small, visual artist/director Doug Fitch created several productions for the New York Philharmonic, including Ligeti’s Le grand macabre (cited as the top opera of 2010 by The New York Times, New York Magazine, and Time Out New York); Janáček’s The Cunning Little Vixen (New York Magazine’s Best Classical Event of the Year); and A Dancer’s Dream, which was filmed and screened in movie theaters worldwide.

He has also made productions for the Los Angeles Opera (Hansel and Gretel), Los Angeles Philharmonic (Peter and the Wolf in Hollywood), and Santa Fe Opera (Turandot). For Canada’s National Arts Centre, he created a live-animation version of Histoire du soldat. For the Royal Stockholm Philharmonic Orchestra he directed and designed Das Rheingold. At Tanglewood, his production of Elliott Carter’s What Next? was filmed and then screened at the Museum of Modern Art.

Doug Fitch’s creative life began with his family’s touring puppet theater. He studied cooking at La Varenne in Paris, and architectural and industrial design at the Institut d’architecture et d’études urbaines in Strasbourg, France, under Gaetano Pesce. He emerged as an architectural designer in the 1980s, and then collaborated with Mimi Oka on edible art installations called Orphic Feasts, leading to their book, Orphic Fodder. In co-production with Universal Music and Deutsche Grammophon, Giants Are Small developed Peter and the Wolf in Hollywood – an iPad app, CD, and digital album, for which he narrated a live version with the National Symphony Orchestra this last May.