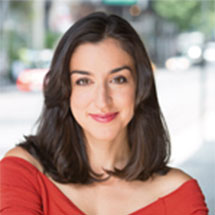 Elena Araoz is a stage director of theater and opera, as well as an actress and writer.

As a director, she works internationally, Off-Broadway and across the country.

Upcoming, Araoz will direct Mac Wellman’s A Chronicle of the Madness of Small Worlds at New York Theatre Workshop’s “Next Door,” Romeo and Juliet for St. Louis Shakespeare and readings for Anna Deavere Smith and the Institute on the Arts and Civic Dialogue’s event “Hidden Hate, Hidden Love.”

NYC productions this past year include Catherine Filloux’s Kidnap Road at La Mama, Maria Irene Fornes’ Mud, Octavio Solis’s Prospect, Dipika Guha’s Mechanics of Love, Virginia Grise’s She-She-She, Hilary Bettis’ Alligator, and Warren Leight’s Union Square Incident for The 25 Hour Plays on Broadway. Regionally, Araoz directed Naomi Wallace’s The Retreating World, and Two Arms and a Noise – a physical theatre piece about the life of an indigenous Peruvian woman which Araoz originally wrote and directed as a New York Theatre Workshop fellow and which was recognized by the Latino Theatre Commons as one of “thirty-six plays and writers that everyone should know” (performed for the Bucharest International Theatre Platform in Romania). The Drama League recently named Araoz the inaugural Beatrice Terry Artist-In-Residence where she completed her play Plastic Drastic, which she also directed for The Rose Theatre.

She has worked extensively with Sir Jonathan Miller, most recently as choreographer and associate director for his La traviata at Vancouver Opera and has worked on his Broadway King Lear and multiple operas at Lincoln Center, Seattle Opera, BAM and Glimmerglass Opera.