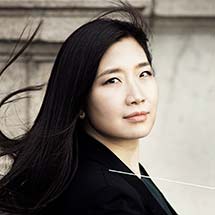 Appears on: Chopin’s Piano Concerto No. 2

With this concert, Eun Sun Kim makes her debut with the Oregon Symphony.

Following her sensational debut with La traviata at Houston Grand Opera, Eun Sun Kim was named the company’s first principal guest conductor in 25 years. Her critically acclaimed performances of Verdi’s Requiem with the Cincinnati Symphony and a new production of Rusalka at San Francisco Opera have furthered her presence in North America, with the latter earning praise from the San Francisco Chronicle as “a company debut of astonishing vibrancy and assurance” with “magnificent musical values on display from top to bottom.”

In the 2019/20 season, Ms. Kim leads concerts with the Los Angeles Philharmonic at the Hollywood Bowl, Cincinnati Symphony, and the symphony orchestras of San Diego, Oregon, and Seattle. Continuing a series of important operatic debuts, she conducts the company premiere of Roberto Devereux at Los Angeles Opera and The Magic Flute at Washington National Opera at the Kennedy Center. She returns to the Berlin Staatsoper for Tosca and leads Salome in her triumphant return to Houston Grand Opera, where The New York Times pronounced her “a major star…with great sensitivity and flexibility.”

In addition to her growing North American presence, Ms. Kim is a regular guest conductor at many important European opera houses. She maintains a particularly close connection with the Berlin State Opera, where she has recently conducted successful productions of La traviata, Ariadne auf Naxos, Madama Butterfly, and Il trovatore.

Ms. Kim established herself in Scandinavia with a successful debut at the Royal Swedish Opera in Madama Butterfly, returning there to conduct Il barbiere di Siviglia. Her performances of Il trovatore at Royal Danish Opera in Copenhagen, Carmen in Oslo, and Madama Butterfly and Der Fliegende Höllander in Bergen have been complemented by concert appearances with Gothenburg Symphony and Norwegian Radio Orchestra, as well as orchestras in Malmö, Umeå, and Aarhus.

Ms. Kim studied composition and conducting in her hometown of Seoul, South Korea, before continuing her studies in Stuttgart, where she graduated with distinction. Directly after graduation, she was awarded the first prize in the International Jesús López Cobos Opera Conducting Competition at the Teatro Real Madrid.