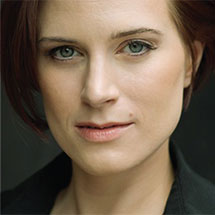 Hannah Penn, mezzo-soprano, enjoys a diverse career as a performer of opera, oratorio, and recital literature. Frequently praised for her musicality and the timbre of her voice, Ms. Penn has recently been called “ . . . a major talent,” and “ . . . an intelligent and wonderfully musical singer” by Portland’s Willamette Week, and was praised for having “ . . . intriguing colors at both ends of her range” by The Oregonian. She has sung more than twenty operatic roles with Glimmerglass Opera, Florida Grand Opera, Portland Opera, Tacoma Opera, and many other companies.

As a past member of Portland Opera’s studio artist program, Ms. Penn sang the roles of Diana in La Calisto, Thisbe in La Cenerentola, Mercedes in Carmen, Flora in La Traviata, and Nancy in Albert Herring. She also sang her first Carmen with Portland Opera, which garnered critical acclaim and resulted in the opportunity to reprise the role the following season with Teatro National Sucre in Quito, Ecuador. Ms. Penn has since returned to Portland Opera as a guest artist, most notably as Julie in Show Boat and L’enfant in Ravel’s L’enfant et les sortileges. A strong proponent of new works, she has performed in the American premiere tours of John Adam’s El Nino and Sven-David Sandstrom’s High Mass. She has also been involved in the American premieres of several operas, including Anthony Davis’ Wakonda’s Dream, Richard Rodney Bennett’s The Mines of Sulphur, and David Carlson’s Anna Karenina.

Ms. Penn also enjoys a full concert schedule, having been featured with orchestras around the country, including several appearances with the Oregon Symphony, Portland Baroque Orchestra, the Sunriver Music Festival, Florida Philharmonic, and the Seattle Baroque Orchestra. Other engagements include Hildegard von Bingen’s Ordo Virtutum with Chamber Music Northwest, a double-bill of David Lang operas with Portland Opera (2017), Mozart’s Requiem with the Sunriver Music Festival, Beethoven’s 9th symphony with the Oregon Symphony, and Maddalena with Portland Opera (2018).