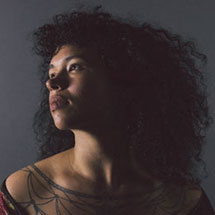 Holland Andrews is an American extended-technique vocalist, composer, and performer who works across Europe and the United States. Andrews is a musician who combines influences from contemporary opera, musical theater, and experimental genres such as ambient and noise music.

Andrews focuses on collaborations in dance, theater, and film, in addition to composing solo works, oftentimes under the stage name Like a Villain. Their vocal style is known to traverse a vast terrain of textures ranging from opera and jazz to throat singing. Their composition style is marked by a multitude of dense vocal layers and textures, which weave together a sprawling emotional tapestry that commands space for both dissonance and intimacy. Holland sings in and composed the music for the critically acclaimed dance piece “Unwanted” by choreographer Dorothée Munyaneza, a work that has received accolades from The New York Times, Le Monde, La Repubblica, The Financial Times, and The New Yorker, and continues to be performed at festivals worldwide.

Holland Andrews is based in Portland, OR.