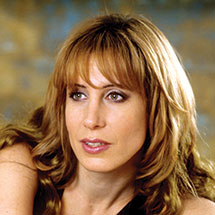 Argentine pianist Ingrid Fliter has won the admiration and hearts of audiences around the world for her passionate yet thoughtful and sensitive music making, played with an effortless technique. Winner of the 2006 Gilmore Artist Award, one of only a handful of pianists and the only woman to have received this honor, Ms. Fliter divides her time between North America and Europe.

Ingrid Fliter made her American orchestral debut with the Atlanta Symphony just days after the announcement of her Gilmore award. Since then she has appeared with the Cleveland Orchestra, the Minnesota Orchestra, the San Francisco Symphony, and many others. Equally busy as a recitalist, Ms. Fliter has performed in New York at Carnegie’s Zankel Hall, the Metropolitan Museum, and the 92nd Street Y, as well as in Chicago, Boston, San Francisco, and Vancouver, as well as for the Van Cliburn Foundation in Fort Worth.

Born in Buenos Aires in 1973, Ingrid Fliter began her piano studies in Argentina with Elizabeth Westerkamp. In 1992 she moved to Europe, where she continued her studies in Germany and Italy. Ms. Fliter began playing public recitals at the age of eleven and made her professional orchestra debut at the Teatro Colon in Buenos Aires at the age of 16.  She has been teaching at the Imola International Academy “Incontri col Maestro” since the fall of 2015.

Ms. Fliter’s two all-Chopin recordings for EMI earned her the reputation as one of the pre-eminent interpreters of that composer, while her most recent EMI recording is an all-Beethoven CD featuring the Pathétique and Appassionata sonatas. Her most recent recording for Linn Records features the complete Chopin Nocturnes and was released in September 2018.