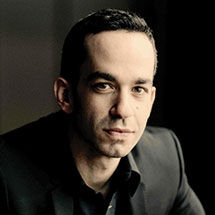 “One of the most admired pianists of his generation” (New York Times), Inon Barnatan is celebrated for his poetic sensibility, musical intelligence, and consummate artistry. He is the recipient of both a prestigious 2009 Avery Fisher Career Grant and Lincoln Center’s 2015 Martin E. Segal Award, which recognizes “young artists of exceptional accomplishment.” He was recently named the new music director of the La Jolla Music Society Summerfest, beginning in 2019.

A regular soloist with many of the world’s foremost orchestras and conductors, the Israeli pianist recently completed his third and final season as the inaugural artist-in-association of the New York Philharmonic. After his recent debuts with the Leipzig Gewandhaus Orchestra, Hong Kong Philharmonic, and Chicago, Baltimore, and Seattle symphonies, he opened the season with the Los Angeles Philharmonic at the Hollywood Bowl.

In recital this season, Barnatan returns to venues including New York’s 92nd Street Y and London’s Wigmore Hall and Southbank Centre, besides making Carnegie Hall appearances with soprano Renée Fleming and his regular duo partner, cellist Alisa Weilerstein. His passion for contemporary music has seen him commission and perform many works by living composers, including premieres of pieces by Thomas Adès, Sebastian Currier, Andrew Norman, and Matthias Pintscher.

“A born Schubertian” (Gramophone), Barnatan’s critically acclaimed discography includes Avie and Bridge recordings of the Austrian composer’s solo piano works, as well as Darknesse Visible, which scored a coveted place on the New York Times’ “Best of 2012” list. His most recent album release is a live recording of Messiaen’s 90-minute masterpiece Des canyons aux étoiles (From the Canyons to the Stars).