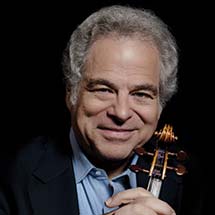 Appears on: Itzhak Perlman with the Oregon Symphony

Itzhak Perlman last appeared with the Oregon Symphony on January 12, 2015, when he performed Bruch’s Violin Concerto No. 1 with conductor Carlos Kalmar.

Undeniably the reigning virtuoso of the violin, Itzhak Perlman enjoys superstar status rarely afforded a classical musician. Beloved for his charm and humanity as well as his talent, he is treasured by audiences throughout the world who respond not only to his remarkable artistry, but also to his irrepressible joy for making music.

Having performed with every major orchestra and at venerable concert halls around the globe, Itzhak Perlman was awarded a Presidential Medal of Freedom, the nation’s highest civilian honor, in November 2015 by President Obama for his meritorious contributions to cultural endeavors of the United States and for being a powerful advocate for people of disabilities. In 2016, he received the Genesis Prize in recognition for his exceptional contributions as a musician, teacher, advocate for individuals with special needs, and dedication to Jewish values. In 2003, he was granted a Kennedy Center Honor by the John F. Kennedy Center for the Performing Arts in celebration of his distinguished achievements and contributions to the cultural and educational life of the United States. In 2009, he was honored to take part in the Inauguration of President Obama, premiering a piece written for the occasion by John Williams alongside cellist Yo-Yo Ma, clarinetist Anthony McGill and pianist Gabriela Montero, for an audience of nearly 40 million television viewers in the United States and millions more throughout the world.

Born in Israel in 1945, Mr. Perlman completed his initial training at the Academy of Music in Tel Aviv. An early recipient of an America-Israel Cultural Foundation scholarship, he came to New York and soon was propelled to national recognition with an appearance on the Ed Sullivan Show in 1958. Following his studies at the Juilliard School with Ivan Galamian and Dorothy DeLay, he won the prestigious Leventritt Competition in 1964, which led to a burgeoning worldwide career. Since then, Itzhak Perlman has established himself as a cultural icon and household name in classical music.

Mr. Perlman has further delighted audiences through his frequent appearances on the conductor’s podium. He has performed as conductor with the New York Philharmonic, Chicago Symphony, Philadelphia Orchestra, Boston Symphony, National Symphony, San Francisco Symphony, Los Angeles Philharmonic, and the symphony orchestras of Dallas, Houston, Pittsburgh, Seattle, Montreal and Toronto, as well as at the Ravinia and Tanglewood festivals.

In the 2019/20 season, Perlman embarks on a debut tour of a new program entitled An Evening with Itzhak Perlman, which captures highlights of his career through narrative and multi-media elements, intertwined with performance. On the orchestral front, Perlman makes appearances with the Baltimore Symphony, Atlanta Symphony, Calgary Philharmonic, Charlotte Symphony, Grand Rapids Symphony, Toledo Symphony, and Colorado Springs Philharmonic. Throughout the season, he plays recitals with his longtime collaborator, Rohan De Silva, across North America in Northridge (Los Angeles), Costa Mesa, Rohnert Park (Sonoma County), Seattle, Spokane, Greenville, Knoxville, and a Florida tour and in the NYC region. During the summer, he led the Chicago Symphony Orchestra in an all-Tchaikovsky program at the Ravinia Festival.

A recent award-winning documentary on Mr. Perlman, titled Itzhak, premiered in October 2017 as the opening film of the 25thAnnual Hamptons International Film Festival. It was released theatrically in over 100 cinemas nationwide in March 2018, with international releases that followed in summer 2018. Directed by filmmaker Alison Chernick, the enchanting documentary details the virtuoso’s own struggles as a polio survivor and Jewish émigré and is a reminder why art is vital to life.

Itzhak Perlman’s recordings have garnered 16 GRAMMY® Awards and regularly appear on the best-seller charts. In 2008, Mr. Perlman was honored with a Grammy Lifetime Achievement Award for excellence in the recording arts.

Mr. Perlman’s most recent album features him in a special collaboration with Martha Argerich. Released in 2016 by Warner Classics, it marked a historic first studio album for this legendary duo exploring masterpieces by Bach, Schumann, and Brahms. It had been 18 years since their first album, a live recital from the Saratoga Performing Arts Center. On that momentous occasion in 1998, in addition to recording the material for their initial disc, the pair recorded Schumann’s Violin Sonata No. 1. The Schumann Sonata at long last was released in 2016 alongside new material, making the album a fascinating ‘then and now’ portrait of how two living legends have evolved musically.

Over the past two decades, Mr. Perlman has become actively involved in music education, using this opportunity to encourage gifted young string players. Alongside his wife Toby, his close involvement in the Perlman Music Program has been a particularly rewarding experience, and he has taught full-time at the Program each summer since its founding in 1993. Mr. Perlman currently holds the Dorothy Richard Starling Foundation Chair at the Juilliard School.

Numerous publications and institutions have paid tribute to Itzhak Perlman for the unique place he occupies in the artistic and humanitarian fabric of our times.  He was awarded an honorary doctorate and a centennial medal on the occasion of Juilliard’s 100th commencement ceremony in 2005. Itzhak Perlman’s presence on stage, on camera, and in personal appearances of all kinds speaks eloquently on behalf of the disabled, and his devotion to their cause is an integral part of his life.