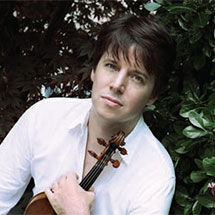 Joshua Bell last appeared with the Oregon Symphony on February 22, 2016, when he performed Max Bruch’s Violin Concerto No. 1 with conductor Robert Spano.

With a career spanning more than 30 years as a soloist, chamber musician, recording artist, and conductor, Joshua Bell is one of the most celebrated violinists of his era. An exclusive Sony Classical artist, Bell has recorded more than 40 albums garnering Grammy, Mercury, Gramophone, and Echo Klassik awards, and is a recipient of the Avery Fisher Prize. Named the music director of the Academy of St. Martin in the Fields in 2011, he is the only person to hold this post since Sir Neville Marriner formed the orchestra in 1958.

In 2018, Bell tours with the Academy to the United Kingdom, Germany, the United States, and Asia. With pianist Sam Haywood, Bell will perform 10 recitals in Europe and America, and on February 7, 2018, he reunited with collaborator pianist Jeremy Denk for a recital broadcast live from Carnegie Hall. Further season highlights include dates with the Philadelphia Orchestra, Danish National Symphony, and an all-Beethoven play/direct program with the Orchestre National de Lyon.

Recently Sony Classical released Joshua Bell – The Classical Collection, a 14-CD set of albums of classical repertoire that displays Bell’s unique breadth, versatility, and breathtaking virtuosity. Slated for May 2018 is Bell’s recording with the Academy of Bruch’s Scottish Fantasy and Violin Concerto in G Minor.

Convinced of the value of music as an educational tool, Bell is a member of Turnaround Arts and Education Through Music, which provide arts education to low-performing elementary and middle schools.