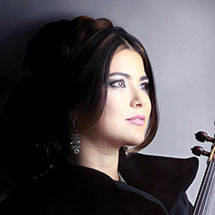 Karen Gomyo last appeared with the Oregon Symphony on April 27, 2015, when she performed Mendelssohn’s Violin Concerto in E Minor with conductor Gilbert Varga.

In May 2018, she performed the world premiere of Samuel Adams’ new Chamber Concerto with the Chicago Symphony Orchestra and Esa-Pekka Salonen to great critical acclaim. The work was written for her and commissioned by the CSO to celebrate the 20th anniversary of its MusicNow series.

Other 2018/19 season highlights include debuts with the Philharmonia Orchestra in London conducted by Jakub Hrůša and the Royal Northern Sinfonia in England with Karina Canellakis, as well as returns to the San Francisco Symphony, Houston Symphony, Vancouver Symphony, Dallas Symphony, and the WDR Symphony Orchestra Cologne in Germany.

Last season she performed in recital at the Sydney Opera House and toured with Edo de Waart and the New Zealand Symphony. She also returned to the symphony orchestras of St. Louis, Montreal, Detroit, and Indianapolis, among others. Additionally, she performed in her annual chamber music project at the Louisiana Museum of Modern Art in Denmark.

Strongly committed to contemporary works, Gomyo performed the North American premiere of Matthias Pintscher’s Concerto No. 2, “Mar’eh,” with the composer conducting the National Symphony Orchestra of Washington D.C. She has collaborated in chamber music compositions with Jörg Widmann, Olli Mustonen, and Sofia Gubaidulina.

In recital and chamber music, Gomyo has performed in festivals throughout the US and Europe with collaborators including the late Heinrich Schiff, Alisa Weilerstein, Leif Ove Andsnes, Kathryn Stott, and Lawrence Power. In 2018 she appears at the Seattle Chamber Festival and the Australian Festival of Chamber Music.

Karen Gomyo plays on the “Aurora, exFoulis” Stradivarius violin of 1703 that was bought for her exclusive use by a private sponsor.