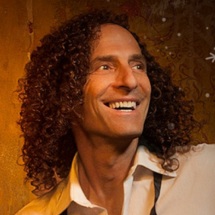 In a recording career that spans almost three decades and 24 albums, Grammy Award-winning saxophonist Kenny G has grafted elements of R&B, pop, and Latin music to a jazz foundation, solidifying his reputation as the premier artist in contemporary jazz. Since the early ’80s, his combination of unparalleled instrumental chops and indelible melodies has resulted in sales of more than 75 million records worldwide (45 million in the U.S. alone) and more than a dozen climbs to the top of Billboard’s Contemporary Jazz chart.

Inspired by the likes of Earth, Wind & Fire and Grover Washington Jr., Kenny was only 17 when he landed a gig with Barry White and his Love Unlimited Orchestra in 1973. After high school, gigs with R&B and contemporary jazz artists kept coming. In 1982, he landed a record deal with Arista and launched a solo career with three critically acclaimed jazz albums — Kenny G (1982), G-Force (1983) and Gravity (1985).

By the ’90s, Kenny was a multi-platinum seller and a frequent collaborator with some of the most iconic figures in American popular music, including Aretha Franklin, Whitney Houston, Natalie Cole, and Frank Sinatra. His subsequent studio albums Silhouette (1988) and Breathless (1992) were hugely successful, the latter selling more than 12 million records in the U.S. alone and spawning the Grammy-winning single “Forever in Love.”

Another major career highlight for Kenny was Miracles, a 1994 holiday album that took the saxophonist to the top of the Billboard chart for the first time and has since become the best-selling holiday album of all time. His two holiday albums since then — Faith (1999) and Wishes (2002) — have been similarly successful. At Last ... The Duets Album, released in 2004, features performances by Barbara Streisand, Burt Bacharach, and LeAnn Rimes, along with a remake of Outkast’s “The Way You Move” with Earth, Wind & Fire.

After the success of Rhythm and Romance (2008) and Heart and Soul (2010), the second of which was a return to the classic R&B sounds of his Seattle childhood, Kenny has taken a step in a new direction with his latest release, Namaste India (2012). A collaboration with Indian santoor player and vocalist Rahul Sharma, the album captures both the natural meditative sound of Indian classical music and the flamboyant jazz melodies of the saxophone.