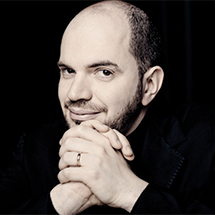 Appears on: Rachmaninoff’s Piano Concerto No. 2 with Pianist Kirill Gerstein

Pianist Kirill Gerstein’s curiosity and versatility has led to a powerful engagement with a wide range of repertoire and styles. From Bach to Adès, his playing is distinguished by its clarity of expression, discerning intelligence, and virtuosity. Gerstein’s energetic and imaginative musical personality has rapidly taken him to the top of his profession.

An American citizen based in Berlin, Kirill Gerstein’s career is balanced between the US and Europe. Highlights of his 2017–18 season in North America include debuts with the Pittsburgh and National symphonies; re-engagements with the Minnesota Orchestra and the Boston, Chicago, San Francisco, Indianapolis, Houston, Colorado, and Oregon symphonies; summer festival appearances at Ravinia, Aspen; his debut at the Mostly Mozart Festival; and a tour with cellist Clemens Hagen with performances in Philadelphia, Toronto, and Montreal. Internationally, Mr. Gerstein works with the Leipzig Gewandhaus Orchestra in Leipzig; the Bavaria Radio Orchestra; the BBC Proms in London; the Czech, Rotterdam, Stockholm, and Oslo Philharmonics; and on tour in Paris and Vienna.

Kirill Gerstein’s recent North American engagements includes performances with the Cleveland and Philadelphia Orchestras; the New York and Los Angeles Philharmonics; and the St. Louis, Atlanta, Cincinnati, Dallas, Vancouver, and Montreal symphonies, as well as recital appearances in New York, Chicago, Washington DC, Seattle, Miami, and at Princeton and Duke Universities. In Europe, Mr. Gerstein has played with such prominent European orchestras as the Berlin Philharmonic and the Royal Concertgebouw Orchestra, the Munich and London Philharmonics, Dresden Staatskappelle, Finnish Radio Orchestra, Tonhalle Orchestra in Zurich, and the Ochestre National de France. He has performed recitals in Vienna, Paris, Prague, Hamburg, London’s Wigmore Hall and Queen Elizabeth Hall, and at the Liszt Academy in Budapest. His European festival appearances include performances at the Salzburg Festival, as well as at Verbier, the Lucerne and Edinburgh Festivals, the Proms in London, and the Jerusalem Chamber Music Festival.

Autumn 2017 marks the release of Scriabin’s Piano Concerto in F-sharp minor with the Oslo Philharmonic and Chief Conductor Vasily Petrenko (LAWO Classics) and the recording of Scriabin’s Prometheus: The Poem of Fire with the same forces. Early 2018 brings Gershwin’s Piano Concerto in F and Rhapsody in Blue with the Saint Louis Symphony Orchestra and David Robertson for Myrios classics, joining previous recordings for the label, which include Liszt’s Transcendental Études, picked by The New Yorker as one of 2016’s most notable recordings; Tchaikovsky’s Piano Concerto No. 1 in the composer’s own final version from 1879; Imaginary Pictures coupling Mussorgsky’s Pictures at an Exhibition with Schumann’s Carnaval; a recital disc of works by Schumann, Liszt, and Knussen; and two discs of sonatas for viola and piano by Brahms, Schubert, Franck, Clarke, and Vieuxtemps with Tabea Zimmerman.

Brought up in the former Soviet Union studying both classical and jazz piano, Gerstein moved to the US at age 14, where he was the youngest student to attend Boston’s Berklee College of Music. Shifting his focus to the classical repertoire, he studied with Solomon Mikowsky in New York, Dmitri Bashkirov in Madrid, and Ferenc Rados in Budapest. Gerstein won the first of a series of prestigious accolades in 2001: First Prize at the 10th Arthur Rubinstein Competition. In 2002, he won a Gilmore Young Artist Award, and in 2010 he won both an Avery Fisher Career Grant and the Gilmore Artist Award, which provided the funds for him to commission new works from Timothy Andres, Chick Corea, Alexander Goehr, Oliver Knussen, and Brad Mehldau. Keenly aware of the importance of working with young musicians, Gerstein taught at the Stuttgart Hochschule Musik from 2007–17 and, beginning in the fall of 2018, will teach at the Kronberg Academy’s newly announced Sir András Schiff Performance Program for Young Artists.