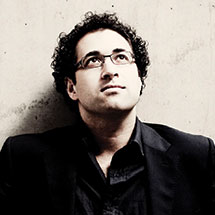 British conductor Leo Hussain has established himself as a leading interpreter in his generation of Mozart, the second Viennese school, and great 20th-century masterpieces, breathing life into new scores and bringing fresh perspective to programming the core Romantic repertoire with his musical intellect and curiosity. He was formerly music director of the Opéra de Rouen and Salzburg Landestheater, and now conducts many of the world’s top orchestras and opera houses.

Forthcoming European highlights this season include debuts with the Orchestre Philharmonique du Luxembourg and Gulbenkian Orchestra, a return to Oper Frankfurt, and a new production of Berg’s Wozzeck at Theater an der Wien, where he conducts most seasons, working with the Wiener Symphoniker and ORF Vienna Radio Symphony Orchestra. These follow recent performances with the Bamberg Symphony at Mozartfest Würzburg, WDR Symphony Orchestra Cologne, DSO Berlin, Deutsche Radio Philharmonie Saarbrücken Kaiserslautern, Prague Philharmonia, and Royal Danish Orchestra. Outside Europe he has conducted the NHK Symphony Orchestra and the Tokyo Metropolitan Symphony Orchestra at the Tokyo Spring Festival, and makes debuts this season at the West Australian and Tasmanian symphony orchestras, alongside a U.S. debut at the San Francisco Opera.

In 2016, he made his critically-acclaimed debut at the Royal Opera House with Enescu’s Oedipe, described by The Sunday Times as “a musical performance of overwhelming impact,” leading to an immediate re-invitation. Other notable operatic successes include Strauss’ Capriccio for Santa Fe Opera, Britten’s The Rape of Lucretia for Glyndebourne Festival Opera, and productions at La Monnaie, English National Opera, and the Bavarian and Berlin state operas. He enjoys a strong relationship with the George Enescu Festival with recent concert performances of Berg’s Wozzeck and Schoenberg’s Gurre-Lieder.

Early success at the Salzburg Festival, where he assisted Simon Rattle and the Berliner Philharmoniker, as well as Valery Gergiev and the Vienna Philharmonic, led to worldwide symphonic debuts and close working relationships with these and other conductors, including Daniel Barenboim and Yannick Nézet-Séguin.