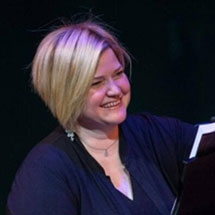 Appears on: Kristin Chenoweth in Concert – For The Girls

Mary-Mitchell Campbell is a conductor, music director, orchestrator, composer, and arranger. She has served as the music director for many Broadway shows, including Mean Girls, The Prom, My Love Letter to Broadway with Kristin Chenoweth, Tuck Everlasting, Finding Neverland, Big Fish, The Addams Family, Company, and Sweeney Todd. She also music directed Stephen Sondheim’s last musical, Road Show,at the Public Theater. She won a Drama Desk for Best Orchestrations for the 2006 revival of Company starring Raul Esparza and was nominated for Best Orchestrations for her work on the Off-Broadway productions of Allegro and Hello Again. She has a very active concert career and performs frequently with Kristin Chenoweth, Gavin Creel, Jonathan Groff, Laura Benanti, and Raúl Esparza. In her pop career she has worked with Alicia Keys, Katy Perry, John Legend, Amy Grant, Kelly Clarkson, Stevie Wonder, James Taylor, Elvis Costello, and Josh Groban in concerts.

She is passionate about arts education and poverty reduction. She is the founder and co-executive director of ASTEP, or Artists Striving To End Poverty (www.asteponline.org), which recruits and trains high level artists to work with kids in extreme situations to teach them health education and life skills through the arts. She is a regular volunteer with ASTEP programs in the US, Africa, and India. She is from North Carolina and has taught on the faculties of Juilliard, NYU, and Boston College.