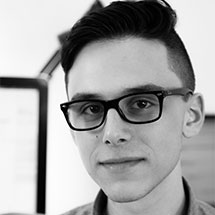 Appears on: Stravinsky's Rite of Spring

Matthew Haber is a New York-based stage and multimedia experience designer. While his practice is primarily focused on video and projection design for theatre, he has also designed video and scenery for opera, dance, themed entertainment, concerts, and live broadcast.

Scenic design credits include Shape of the Table, Pentecost, and The Prisoner’s Dilemma for Burning Coal Theatre and The Cockpit Theatre (London); Krapp’s Last Tape and The Dumb Waiter (Boston Center for American Performance); and Norman Lear: Just Another Version of You (Film Theatrical Recreations, PBS).

Matthew is the co-founder and managing director of BeSide Digital, a Brooklyn-based design and production studio that creates innovative media and interactive design for brands, bands, and immersive experiences. He has served as a designer and technical consultant for dozens of live performance and installation projects throughout the Americas, Europe, and Asia for brands such as Cadillac, Armani, Samsung, Visa, American Express, Tiffany & Co, GQ, The City of New York, Refinery29, Juicy Couture, and The Metropolitan Museum of Art. BeSide’s work can also be seen in the immersive video elements, innovative holographic projections, and interactive show control system featured in the touring Walking Dead Experience.

Matthew is a member of United Scenic Artists Local 829, has a BFA in theatre design from Boston University, and has served as a lecturer in the theatre design program at the Rutgers Mason Gross School of the Arts.