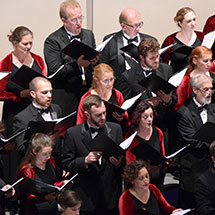 Oregon Repertory Singers (ORS) is a premier choral arts nonprofit organization founded in 1974, presenting world-class choral music accessible to all. The professional caliber adult choir of over 100 members was recently lauded as Portland’s “finest large choir.” The ORS Youth Choir, an education- and performance-based program for students ages 4–18, is unmatched in the Portland area. Oregon Repertory Singers is committed to nurturing the singers, listeners, and supporters of this generation and the next. ORS celebrates its 45th anniversary in the 2018-19 season.

The Oregon Repertory Singers adult choir performs repertoire both rare and recognizable, encompassing a multitude of eras, languages, and musical styles. With over 100 members, this close community of singers comes from all walks of life and many different communities throughout the Portland metro area. Oregon Repertory Singers presents a wide variety of programming that promotes music from the newest generation of great composers alongside celebrated choral masterworks. In October 2018, ORS released Shadows on the Stars through Gothic Records. The album includes live and in-studio recordings of the music of Morten Lauridsen and other composers from the Pacific Northwest.