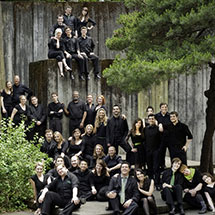 Appears on: Sibelius’ The Tempest, Game ON!, and The Moldau and Water Music

Classics Today calls The Portland State Chamber Choir “amongst the finest choirs in the world.” Since its founding in 1975, the Chamber Choir has performed and competed in venues across the country and around the world, earning over 30 medals and awards in international choir competitions including being the only American choir to have won the Seghizzi International Competition for Choral Singing in Italy in 2013, and the Bali International Choral Festival in Indonesia in 2017. The Chamber Choir has performed multiple times at national and divisional conferences of the American Choral Director’s Association and The National Association for Music Education, and in 2014 hosted the national conference of the National Collegiate Choral Organization. In the summer of 2020 they will represent the United States at the World Symposium on Choral Music in Auckland, New Zealand.

In February 2011 the Chamber Choir collaborated with Portland-born composer Morten Lauridsen, who described their singing as “an absolutely top-notch superb display of choral artistry.” The Chamber Choir’s 2012 CD A Drop in the Ocean was favorably reviewed and featured in both Fanfare and Stereophile magazines and was a finalist for the 2012 American Prize in Choral Music. Their 2014 recording Into Unknown Worlds was named a “Recording to Die For” by Stereophile magazine. It was the first-ever student recording to receive this distinction and was a finalist for the 2014 CARA Award for Best Classical Album. Their latest album, The Doors of Heaven - Music of Eriks Esenvalds, was released by Naxos. It debuted at #1 on the Billboard Traditional Classical Chart (a first for a university choir) and was also a #1 seller on Amazon and iTunes. Apple Music added the album to its "A-List Classical Playlist."

Since 2013 the Portland State Chamber Choir has performed regularly with the Oregon Symphony in works as diverse as Beethoven’s Choral FantasyandSymphony No. 9, Handel’s Messiah, Mahler’s Symphony No. 2, and Stravinsky’s Persephone in a fully staged production direction by Michael Curry, whose credits include The Lion King and Cirque du Soleil. In 2014 they presented the Portland premiere performances of both David Lang’s Little Match Girl Passion and Samuel Barber’s The Lovers.