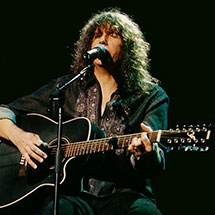 Appears on: The Music of Led Zeppelin

Randy Jackson is the lead singer/guitarist for the rock band Zebra. Randy’s first foray into recording success began with the self-titled Zebra debut album, released on Atlantic Records in 1983. Critically acclaimed for its lush rock sounds, due in large part to Jackson’s searing lead vocals and soaring guitar leads, the album sold 75,000 copies the first week. “Who’s Behind the Door” and “Tell Me What You Want”, written by Jackson, received serious notice in the press, and helped to form legions of Zebra fans almost instantly. The latest Zebra release, “Zebra IV”, was also produced and engineered by Jackson.

Randy toured as keyboardist, guitarist, and backing vocalist in 1989 with the original, reunited Jefferson Airplane, their last tour together. He has also worked extensively in the area of musical software and hardware development.