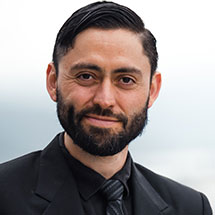 Appears on: Lyle Lovett and his Acoustic Group

Raúl Gómez-Rojas is in his fifth season as music director of the Metropolitan Youth Symphony (MYS), where he enjoys working with a vibrant community of conductors, coaches, staff, families, and over 500 students in 14 orchestra, band, and jazz ensembles. Mr. Gómez was recently selected as one of six conductors to be featured in the League of American Orchestra's 2018 Bruno Walter National Conductor Preview, after competing for the honor with nearly 150 applicants from around the world. Conductors were selected for their “experience, talent, leadership, and commitment to a career in service to American orchestras.”

A passionate advocate for equity and access, Gómez has led the recent expansion of several MYS programs, including the creation of new beginning strings classes and ensembles in Hillsboro, OR, responding to fast-paced demographic changes in the area. He enjoys speaking publicly about the transformative power of music education. His TED talk “El Concierto Inolvidable” was an audience favorite in TEDxPuraVida 2014.

Gómez lives in Portland, OR with his wife, theater and screen actor Sarah Ellis Smith. They enjoy giving back to the community by supporting local performing arts organizations and advocacy groups.