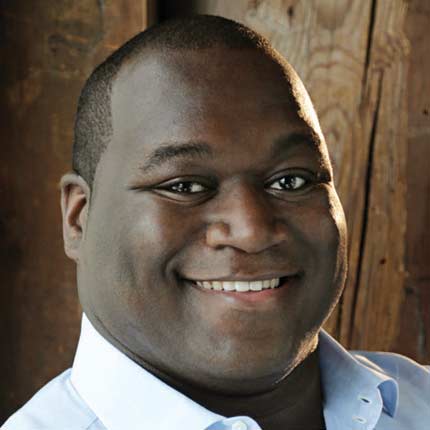 Grammy and Emmy-winning baritone Reginald Smith, Jr., this year’s us representative at the BBC Cardiff Singer of the World Competition, has been lauded as a “passionate performer” (New York Times) with an “electric, hall-filling” (The Baltimore Sun), and “thrillingly dramatic” (Opera News) voice that is “one of the most exciting baritone sounds to come along in years” (Opera News). Reginald, a native of Atlanta, Georgia, is a Grand Finals winner of the 2015 Metropolitan Opera National Council Auditions and a graduate of the Houston Grand Opera Studio.

This season marks the baritone’s debuts with the Lyric Opera of Chicago as Uncle Paul in Terrence Blanchard’s Fire Shut Up in My Bones, with the San Diego Opera as Don Alfonso in Così Fan Tutte and with Charleston’s Holy City Arts and Lyric Opera as Germont in La Traviata. In concert he will return to the Dallas Symphony for holiday concerts, debut with the Oregon Symphony in Beethoven’s Symphony No. 9, sing Amonasro in Act 3 of Aida with the Atlanta Symphony and perform Messiah with the Nashville

Symphony. Mr. Smith will also appear in solo recital at Kennesaw State University. Future engagements include a debut with the Santa Fe Opera and returns to the Lyric Opera of Chicago and the Houston Grand Opera, all in leading roles.

The previous season Mr. Smith made his much-anticipated debut at the Metropolitan Opera as Jim in Porgy and Bess, followed by Amonasro in Aida with the Houston Grand Opera and Jake in Porgy and Bess with the Atlanta Opera. His orchestral appearances included Christmas Pops Concerts with the Dallas Symphony Orchestra.

Prior to that, Reginald Smith, Jr. appeared as Jake in Porgy and Bess with Cincinnati Opera, Sharpless in Madama Butterfly with Opera Memphis, Amonasro in Aida with Opera Idaho, and returned to the rosters of the Lyric Opera of Chicago and San Francisco Opera. His orchestral engagements included the baritone solo in Carmina Burana for his return to the Houston Symphony and the bass solo in Beethoven’s Symphony No. 9 at New Jersey Symphony, West Virginia Symphony, and Symphoria.