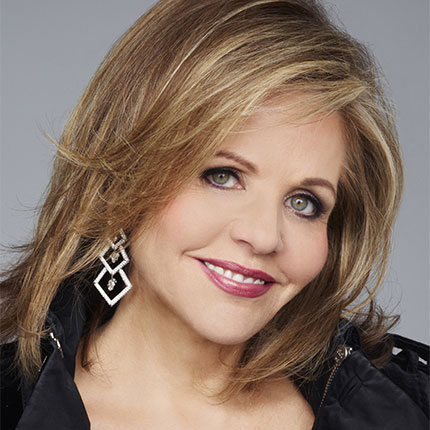 Renée Fleming is one of the most celebrated singers of our time, performing on the stages of the world’s greatest opera houses and concert halls. Honored with four Grammy® awards and the US National Medal of Arts, Renée has sung for momentous occasions from the Nobel Peace Prize ceremony to the Diamond Jubilee Concert for Queen Elizabeth II at Buckingham Palace. In 2014 she sang in the televised concert at the Brandenburg Gate to commemorate the 25th anniversary of the fall of the Berlin Wall. A ground-breaking distinction came in 2008 when Renée became the first woman in the 125-year history of the Metropolitan Opera to solo headline an opening night gala. In 2014, Renée became the first classical artist ever to sing “The Star-Spangled Banner” for the Super Bowl.

Last spring, Renée joined The Philadelphia Orchestra in the world premiere concert presentation of The Hours, a new opera by Kevin Puts based on the award-winning novel and film. She will appear in the fully staged premiere at the Metropolitan Opera in November. Renée’s concert calendar this season includes appearances in London, Paris, Vienna, Milan, Los Angeles, Chicago, Washington, DC, and at Carnegie Hall. During the pandemic, her performances on digital platforms included streamed online concerts for the Metropolitan Opera, the Kennedy Center, Lyric Opera of Chicago, la Opera, and the Baltimore Symphony Orchestra.

Known for bringing new audiences to classical music and opera, Renée has sung not only with Luciano Pavarotti
and Andrea Bocelli, but also with Elton John, Paul Simon, Sting, Josh Groban, and Joan Baez. She has hosted a wide variety of television and radio broadcasts, including the Metropolitan Opera’s Live in HD series and Live from Lincoln Center. Her voice is featured on the soundtracks of Best Picture Oscar winners The Shape of Water and The Lord of the Rings. She has recorded everything from complete operas and song recitals to indie rock and jazz. Renée’s latest album is Voice of Nature: The Anthropocene, with Yannick Nézet-Seguin as pianist. A collection of classical songs and specially commissioned world premieres, the album focuses on nature as both inspiration and casualty of humans. A champion of new music, Renée has premiered works by a wide range of contemporary composers, including recent compositions by André Previn, Caroline Shaw, Kevin Puts, Anders Hillborg, Henri Dutilleux, Brad Mehldau, and Wayne Shorter.

In 2019, Renée appeared opposite Ben Whishaw in Norma Jean Baker of Troy to open The Shed in New York City. Later that year, she performed world premieres by André Previn and Kevin Puts with the Boston Symphony Orchestra, and the London premiere of The Light in the Piazza, bringing the acclaimed production to Los Angeles and Chicago in the autumn. Renée earned a Tony Award nomination for her performance in the 2018 Broadway production of Rodgers and Hammerstein’s Carousel.

In recent years, Renée has become known as a leading advocate for research at the intersection of arts, health, and neuroscience. As Artistic Advisor to the Kennedy Center for the Performing Arts, she launched the first ongoing collaboration between America’s national cultural center and its largest health research institute, the National Institutes of Health. In association with the National Endowment for the Arts, Sound Health brings together leading neuroscientists, music therapists and arts practitioners to better understand the impact of arts on the mind and body. Inspired by the Sound Health initiative, Renée has created a program called Music and the Mind, which she has presented in more than 50 cities around the world, earning Research!America’s 2020 Isadore Rosenfeld Award for Impact on Public Opinion. In 2020, Renée launched Music and Mind LIVE, a weekly web show exploring the connections between arts, human health, and the brain, amassing nearly 700,000 views from 70 countries. She is now an advisor for major initiatives in this field, including the Sound Health Network at the University of California San Francisco and the NeuroArts Blueprint at Johns Hopkins University.

Renée’s book The Inner Voice was published by Viking Penguin in 2004 and is now in its sixteenth printing. It is also published in France, the United Kingdom, Germany, Japan, Poland, Russia, and China. Advisor for Special Projects at la Opera, Renée also leads SongStudio at Carnegie Hall. She is Co-Director of the Aspen Opera Center and VocalArts at the Aspen Music Festival. Renée’s other awards include the Fulbright Lifetime Achievement Medal, Germany’s Cross of the Order of Merit, Sweden’s Polar Music Prize, and France’s Chevalier de la Légion d’Honneur.