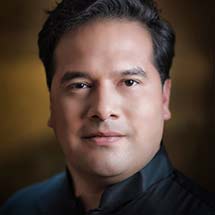 With this concert, Robert Trevino makes his debut with the Oregon Symphony.

Born in 1984, Robert Trevino’s star has risen rapidly among American conductors. The past three years have seen his appointments as music director of the Basque National Orchestra and chief conductor of the Malmo Symphony Orchestra. He recently signed a multi-year, exclusive recording contract with leading classical label Ondine, to encompass both of his orchestras.

Trevino burst into the international spotlight at the Bolshoi Theater in December 2013, leading a new production of Verdi’s Don Carlo. He was nominated for a Golden Mask award, and one reviewer wrote, “There has not been an American success of this magnitude in Moscow since Van Cliburn.”

As a young musician, he had caught the eye of David Zinman with whom he studied as a conducting fellow at the Aspen Music Festival and was awarded the James Conlon Prize. Immediately afterwards, in 2011, he was the Seiji Ozawa conducting fellow at Tanglewood. He was also invited to study with Michael Tilson Thomas and to assist Leif Segerstam at the Helsinki Philharmonic.

Robert Trevino has commissioned, premiered and worked closely with many leading composers, among them Augusta Read Thomas, Sir Andre Previn, Jennifer Higdon, Phillip Glass, Shulamit Ran, and John Zorn. Says Trevino, “When I'm with an orchestra who are right there with me, loving the music, that's when you know that a life in music is a pretty amazing life." When one encounters Robert Trevino, one has no doubt what he means.