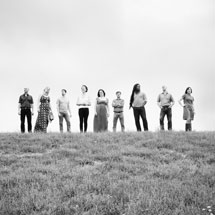 With this concert, Roomful of Teeth makes their debut with the Oregon Symphony.

Roomful of Teeth is a GRAMMY-winning vocal project dedicated to reimagining the expressive potential of the human voice. Through study with masters from vocal traditions the world over, the eight-voice ensemble continually expands its vocabulary of singing techniques and, through an ongoing commissioning process, forges a new repertoire without borders.