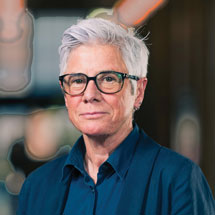 Rose Bond last appeared with the Oregon Symphony on December 5, 2016, when she animated Messiaen’s Turangalîla with conductor Carlos Kalmar.

Rose Bond produces work at the juncture of cinema, animation, and experiential design. Her large-scale, site-specific installations navigate the allegories of place and illuminate urban space. In 2016 Bond directed an expanded animation piece projected live with the Oregon Symphony’s performance of Olivier Messiaen’s Turangalîla. Other sited projections include two pieces for the permanent collection at the Portland Chinatown Museum, 2018; Illumination No.1 at Portland’s Old Town Society Hotel, 2014; a prototype for a media installation in the Smithsonian’s Arts & Industries Building, 2012; Broadsided! at Exeter Castle, 2010; and Intra Muros, shown during the 2007 Platform International Animation Festival and reprised for the Holland Animation Film Festival, Utrecht, 2008, and Nuit Blanche, Toronto 2011.

Bond’s paint-on-film animated films have been presented at major international festivals and are held in the MoMA Film Collection. She has received honors from the American Film Institute, The Princess Grace Foundation, the National Endowment for the Arts, and was awarded an Oregon Media Arts Fellow­ship in 2016. Bond’s work has been cited in numerous publications including Experimental Animation: Origins of a New Art, Re-imagining Animation: The Changing Face of the Moving Image, The Animation Bible, Experimental and Expanded Animation: New Perspectives and Practices, and Experimental Animation: From Analogue to Digital. She received her MFA in ex­perimental filmmaking from the School of the Art Institute of Chicago on a Princess Grace Film Graduate Scholarship. Canadian by birth, Bond is based in Portland, Oregon, where she heads animated arts and is institute director for boundary crossings at the Pacific Northwest College of Art.