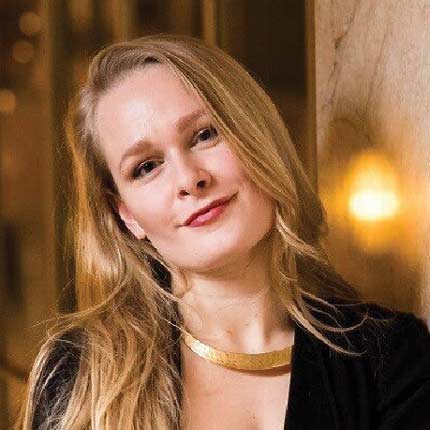 German-American mezzo-soprano Siena Licht Miller’s vivacious stage presence and curiosity for daring repertoire, combined with a “radiance and all-encompassing warmth of her sound” (Chicago Tribune), has propelled her into the world of both opera and concert. An alumna of The Curtis Institute of Music, she received her early training from The Santa Fe Opera and Opera Theatre of Saint Louis.

Joining Opernhaus Zürich as an Ensemble Member in the Season 22/23, she makes exciting debuts this season there as the Page in Salome, Zulma in L’italiana in Algeri, Flosshilde in Rheingold, and Penelope in the world premiere of Leonard Evers’ Die Odyssee. In addition, Siena joins forces with Ballett Zürich and Orchestra La Scintilla in a world premiere by Christian Spuck set to works by Monteverdi, highlighting the composer’s vocal dramas in a choreographic expression. On the concert stage, she returns home to sing Beethoven 9 with The Oregon Symphony.

Siena recently excited audiences with a returntoOperaPhiladelphia,starringin the world premiere of Philip Venables’ Denis & Katya, which was named one of the best classical music performances of the year by The New York Times and The Philadelphia Inquirer, and is a 2020 International Opera Award nominee for BestNew Opera.The operais now being performed in Montpellier and at the Dutch National Opera.

Siena’s symphonic work has earned critical acclaim, with repertoire spanning between Beethoven and Britten, featured as a soloist with the Oregon, Grant Park (Chicago), Columbus, and Charlotte Symphonies.

Operatic highlights include role debuts with Opera Philadelphia as Hermia in A Midsummer Night’s Dream and Zweite Dame in Die Zauberflöte. With the Aspen Opera Center and the Aspen Chamber Symphony, she sang the title role of Ravel’s L’enfant et les sortilèges under the baton of Robert Spano.

Equally at home on the recital stage, Siena was chosen to join in celebrating her mentor Marilyn Horne as a singer on The Song Continues series at Carnegie Hall. In the summer of 2019, she was a participant in the Ravinia Music Festival and subsequently collaborated with pianist Kevin Murphy in a recital tour throughout the U.S. Siena is generously supported by the Bagby Foundation and has received awards from the Metropolitan Opera National Council Auditions, the Marilyn Horne Rubin Foundation, and the Gerda Lissner Foundation. Siena is in her second year of the International Opera Studio at Opernhaus Zürich.