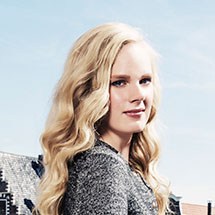 Hailed for her “brilliant… polished, expressive and intense” (Cleveland Plain Dealer) and “absolutely stunning” (Chicago Tribune) playing, Dutch violinist Simone Lamsma is respected by critics, peers, and audiences as one of classical music’s most striking and captivating musical personalities.

With an extensive repertoire of over 60 violin concertos, Simone’s recent seasons have seen her perform with many of the world’s leading orchestras. Notable recent highlights include performances with the Chicago Symphony, described by the Chicago Tribune as “piercingly beautiful,” as well as the Cleveland Orchestra, San Francisco Symphony, Dallas Symphony, and Royal Concergebouw Orchestra.

Highlights for the 17/18 and 18/19 seasons include debuts with the New York Philharmonic, Detroit Symphony, Houston Symphony, Oslo Philharmonic, and Sydney Symphony, and returns to the Warsaw Philharmonic, Copenhagen Philharmonic, and the Yomiuri Nippon Symphony Orchestra in Tokyo. Past seasons also marked several premieres of new works, including the world premiere of a violin concerto by Matijs de Roo during the ZaterdagMatinee series at the Concertgebouw in Amsterdam and a French premiere of Michel van der Aa’s Violin Concerto with the Lyon National Orchestra.

Simone’s most recent recording featuring Shostakovich’s First Violin Concerto and Gubaidulina’s In Tempus Praesens with the Netherlands Radio Philharmonic under James Gaffigan and Reinbert de Leeuw was released in 2017 on Challenge Classics and received high accolades from the press, as did her previous Mendelssohn, Janáček, and Schumann CD with pianist Robert Kulek.

Simone began studying the violin at the age of 5 and moved to the UK aged 11 to study at the Yehudi Menuhin School with Professor Hu Kun. At the age of 14 Simone made her professional solo debut with the North Netherlands Orchestra performing Paganini’s First Violin Concerto. She continued her studies at the Royal Academy of Music in London with Professor Hu Kun and Professor Maurice Hasson, where she graduated aged 19 with first class honors and several prestigious awards. Simone currently lives in The Netherlands.

Simone plays the “Mlynarski” Stradivarius (1718), on generous loan to her by an anonymous benefactor.