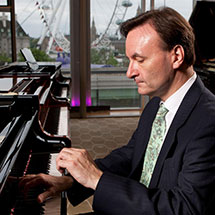 Stephen Hough last appeared with the Oregon Symphony on November 21, 2016, when he performed Saint-Saëns’ Piano Concerto No. 5 with conductor Ludovic Morlot.

Combining a distinguished career as a pianist with those of composer and writer, Stephen Hough is regarded as a Renaissance man of his time. The first classical pianist to be awarded a MacArthur Fellowship and a Commander of the Order of the British Empire (CBE), his mastery of the instrument as well as an individual and inquisitive mind has earned him a multitude of prestigious awards and a longstanding international following.

Since taking first prize at the 1983 Naumburg Competition in New York, Mr. Hough has performed with the world’s major orchestras and given recitals at the most prestigious concert halls. His recent North American engagements include performances with the New York and Los Angeles philharmonics, the Cleveland and Minnesota orchestras, and the San Francisco, Montreal, St. Louis, Pittsburgh, Atlanta and Detroit symphonies among many others; recitals in New York at Carnegie Hall, Lincoln Center, and the 992nd St. Y; at the Kennedy Center; and in Chicago, San Francisco, Los Angeles, and Toronto; and festival appearances at Aspen, Blossom, the Hollywood Bowl, Mostly Mozart, Ravinia, and Tanglewood. Internationally, he appears with orchestras and in recital in major music centers such as London, Paris, Amsterdam, Berlin, Milan, Zurich, Tokyo, Hong Kong, Beijing, Singapore, Shanghai, Sydney, and Melbourne. He has made more than twenty-five appearances at the BBC Proms and in summer 2019 played Queen Victoria’s own piano in celebration of the 200th anniversary of her birth, performing Mendelssohn’s Piano Concerto No. 1 with the Orchestra of the Age of Enlightenment.

Highlights of Stephen Hough’s 19/20 season include re-engagements with the National, Dallas, Toronto, Oregon, Nashville, and North Carolina symphonies; tours to Australia, China, Korea, and Vietnam; recitals at Caramoor, the Van Cliburn Foundation, and Queen Elizabeth Hall at the Southbank in London; and a multi-concert series at London’s Wigmore Hall.

Mr. Hough’s extensive discography of over 60 CDs has garnered international awards including the Diapason d’Or de l’Année, several Grammy nominations, and eight Gramophone Awards including Record of the Year and the Gold Disc. Recent releases include solo piano works by Debussy; the Dream Album, a compilation of Mr. Hough’s favorite short works; and a live recording of Schumann and Dvořák’s piano concertos with Andris Nelsons and the City of Birmingham Symphony Orchestra, all for Hyperion Records. A recording of the five Beethoven concertos with the Finnish Radio Symphony Orchestra, Hannu Lintu conducting, also on the Hyperion label, will be released in May 2020. His award-winning iPad app The Liszt Sonata was released by Touch Press in 2013.

A noted writer, Mr. Hough has written articles for the New York Times, the Guardian, The Times (UK), The Telegraph, Evening Standard, Gramophone, and BBC Magazine. A major anthology of essays by Mr. Hough on musical, cultural, lifestyle, and spiritual subjects – titled Rough Ideas: Reflections on Music and More – will be published by Faber & Faber (UK) in 2019 and by Farrar, Straus and Giroux (US) in 2020. This follows his first novel, The Final Retreat, published by Sylph Editions in March 2018. Also an avid painter, Mr. Hough gave his first exhibition of nearly twenty abstract acrylic paintings in London in 2012.

Stephen Hough is an honorary member of the Royal Philharmonic Society, a visiting professor at the Royal Academy of Music, holds the International Chair of Piano Studies at the Royal Northern College of Music, and is on the faculty of The Juilliard School in New York.