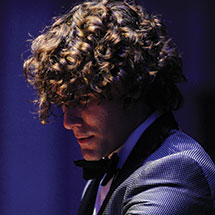 A musical visionary of incomparable gifts, Steve Hackman is a daring voice leading the charge among a new generation of classical musicians intent on redefining the genre. Equally adept in classical and popular forms, his breadth of musical fluency and technique is uncanny – he is at once a composer, conductor, producer, DJ, arranger, songwriter, singer, pianist, and even rapper. He uses those wide-ranging abilities to create ingenious hybrid compositions that blur the lines between high and pop art and challenge our very definitions thereof.

Hackman’s unique style of musical metamorphosis sees modern musical techniques applied to the classical repertoire and vice versa. The result is evocative hybrid works that are both derivative yet wholly original. He synthesizes Brahms and Radiohead, Bartók and Björk, and Tchaikovsky and Drake into epic orchestral tone-poems.

His performances of these pieces have surprised and thrilled diverse sellout audiences across the country, including with the orchestras of Seattle, Pittsburgh, the Boston Pops, Nashville, Oregon, Indianapolis, Grand Rapids, Columbus, Charlotte, Florida, Alabama, and the Colorado Music Festival.

Successful as a composer and arranger, Hackman's work includes pieces for ensembles and artists as diverse as the string trio Time for Three, violinist Joshua Bell, and choral ensembles Chanticleer and The Tallis Scholars. His orchestrations for artists like Time for Three, The Five Browns, Michael Cavanaugh, My Brightest Diamond, Arlo Guthrie, Aoife O’Donovan, and Joshua Radin have been performed by nearly all the major orchestras in America. Hackman is a frequent contributor to From the Top.

Hackman is active on social media under the handle @stevehackmanmusic, and many of the pieces referred to here can be watched in their entirety on YouTube via the @stereohideout channel.