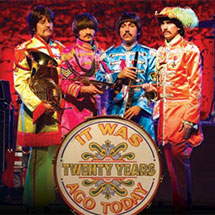 Appears on: The Fab Four

The Emmy Award-winning Fab Four is elevated far above every other Beatles tribute due to their precise attention to detail. With uncanny, note-for-note live renditions of Beatles’ classics such as “Can’t Buy Me Love,” “Yesterday,” “A Day In The Life,” “Twist And Shout,” “Here Comes The Sun,” and “Hey Jude”, the Fab Four will make you think you are watching the real thing.

Their incredible stage performances include three costume changes representing every era of the Beatles ever-changing career, and this loving tribute to the Beatles has amazed audiences in countries around the world, including Japan, Australia, France, Hong Kong, the United Kingdom, Germany, Mexico, and Brazil.

The Fab Four is truly the ultimate tribute.

Beatle fans and critics agree that Ardy is the best musician to ever portray the youthful Paul McCartney. Ardy has toured extensively as Paul in such places as Japan, Korea, Guam, and Puerto Rico, and has appeared on stage with such artists as Bruce Springsteen, Micky Dolenz, and John Fogerty. His left-handed bass playing and “record-accurate” vocals have won him first place in numerous Beatlefest sound-alike contests. Unlike other imitators, he plays piano on such songs as “Hey Jude” and “Let It Be,” just like McCartney did on the original recordings. His strong resemblance to the “cute Beatle” will definitely make you take a second look.

Ron has performed all around the world including in Japan, in Hong Kong, in Argentina, in front of an audience of 30,000 in Brazil, and in Malaysia, where he was invited to play for the Prime Minister in a special performance. He was also chosen to play numerous shows to promote The Beatles Anthology video release by Turner Home Entertainment. His incredible look and soundalike abilities have created the ultimate loving tribute to the late John Lennon. Each night, his uncanny rendition of “Imagine” captures the spirit of the man we all knew and loved.

Born and raised in the birthplace of The Beatles (Liverpool, England), and bearing a remarkable resemblance to George Harrison, it was inevitable that Gavin would be in the cast of The Fab Four. His natural Liverpudlian wit and charm have won him acclaim around the world, and he is now one of the most sought-after artists in his field. Gavin has performed at a number of international venues, and has even shared the stage with Sir Paul McCartney himself. It’s his attention to detail that makes Gavin the best tribute to the spiritual Beatle.

A native of Detroit, MI, Joe formed his first band by the age of 13 and went on to play with a number of Detroit-area bands, ranging from punk/alternative to classic rock and southern gospel. He also loved the Beatles, performing in several local Beatles tributes. Since that time, Joe has become one of the top Ringo Starr impersonators in the world, touring the United States, South America, Europe, and Asia. Joe has also performed on major television shows such as Good Morning America and The Ellen DeGeneres Show, at Caesars Palace in Las Vegas, and for the closing bell at the New York Stock Exchange. This versatile musician plays drums, bass, keyboards, and guitar, on top of being a successful songwriter.

Fred Whitfield has been performing nationally, impersonating Ed Sullivan for over 20 years. His career began as an on-air personality for one of the largest broadcast networks in the country, specializing in commercial voice-overs for radio and television. He also is featured in corporate training videos and emcees events nationwide.