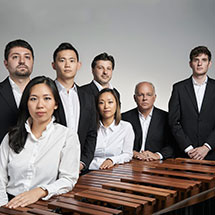 With this concert, The Percussion Collective Robert van Sice makes their debut with the Oregon Symphony.

At the pinnacle of his legendary career, performer and pedagogue Robert van Sice has assembled a stunning collection of young artists who are reinventing the concert experience. The Percussion Collective transcends the medium of percussion through uncommon performance experiences that surprise and engage audiences at a profound emotional level. The hallmarks of van Sice’s musical approach – precise execution, sonic refinement, and dynamic onstage communication – are all on display in the most vivid manner to date. Drawing from an incomparably rich bouquet of talent, The Percussion Collective flexes in size offering exquisitely curated programs for an array of venues and settings. The fabulously successful ten-concert inaugural tour of the United States in the spring of 2018 featured the first performances of the newly commissioned Seaborne, an immersive multimedia work by Emmy Award-winning composer Garth Neustadter and videographer Kjell van Sice that celebrates the beauty of our world’s oceans.

The 2018/19 season began with the group’s first tour to China, featuring a performance of Seaborne in the new Shanghai Symphony Hall. Other highlights will include performances of the first orchestral showcase for The Collective, Drum Circles by Christopher Theofanidis. The work was commissioned by a consortium including the Aspen Music Festival, Baltimore Symphony, Colorado Symphony, and the Oregon Symphony. The Percussion Collective will also be presented by the Yellow Barn Music Festival in Dallas, performing Martin Bresnick's Caprichos Enfaticos, based on Francisco Goya's etchings depicting the horrors of war.

The roster of The Percussion Collective includes some of the world’s most esteemed and dynamic young voices in the art form. Featuring players from Europe, Asia, and the US, this new generation of virtuosi represent the leading edge of innovation in concert conception and performance.