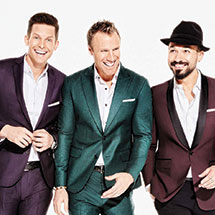 Appear on: The Tenors Christmas

Since 2008, The Tenors have sold over one million albums worldwide, performed nearly 1,000 shows on five continents, and made over 150 television appearances. Their four studio albums have achieved multi-platinum certification, and their first Christmas album, The Perfect Gift, has been certified triple-platinum.

No strangers to the world stage, The Tenors have showcased their undeniable charm and diverse vocal styles at Queen Elizabeth II’s Diamond Jubilee and 90th birthday celebrations at Windsor Castle; for the last four Presidents of the United States, including at the White House Christmas Tree Lighting for the Obama family; at the opening ceremonies of the 2010 Winter Olympics; on The Oprah Winfrey Show; and at The Primetime Emmy Awards to name a few. They have also shared the stage with some of the biggest names in music, including Sir Paul McCartney, Céline Dion, Sarah McLachlan, Sting, Justin Bieber, Andrea Bocelli, Sir Elton John, Smokey Robinson, Stevie Wonder, Lionel Richie, and David Foster.

The Tenors also lend their voices to raise awareness of important charitable causes. In the last year, they have performed at the Music for Mercy concert at the Vatican in Rome, the David Foster Foundation Miracle Gala and Concert in Winnipeg, Elton John’s World TeamTennis Smash Hits fundraising event in Las Vegas, and a show-stopping tribute to Smokey Robinson from the Gershwin Centre in Washington D.C.

This past July, after returning from the island of Malta, where they performed to mark the end of the Maltese Presidency of the EU Council, The Tenors celebrated Canada’s 150th in Ottawa with three sold-out dates at the National Arts Centre in addition to a special performance at WE Day.